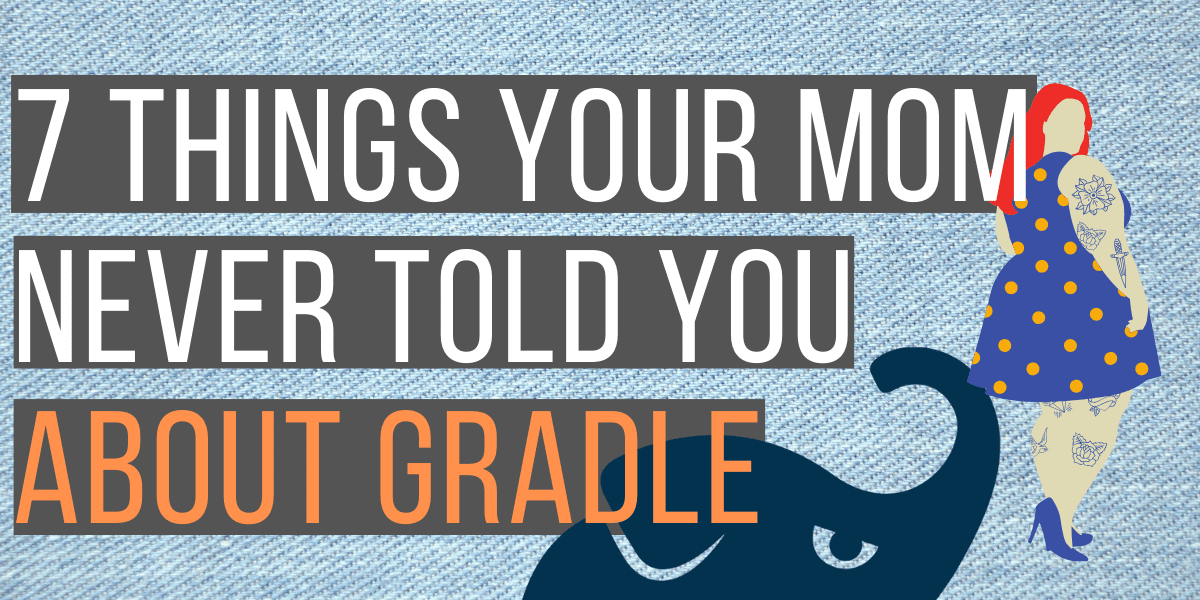 It’s probably fair to say that Gradle has somewhat of a steep learning curve. Certainly compared to Maven, another popular build automation tool, it’s move flexible and less opinionated about how things should work.

Whether you’ve just made the jump into Gradle, or have been using it for a while, in this article you’ll discover seven things you wish you’d known about Gradle. With these pointers, you’ll be well on your way to writing more powerful, more concise build scripts for your application, following best practice all the way.

1. The Gradle build script isn’t as complex as it might seem

The build.gradle can seem at first overwhelming, but it’s helpful to understand that it consists of nothing but these components:

Additionally, since Gradle is written in Groovy, in theory it can contain any additional Groovy or Java code. This should be kept to a minimum, with any extra functionality being extracted out into a plugin.

Brackets are optional when calling methods

As long as the method has at least one parameter, you can leave out the brackets. This means we can have code like this in our build file:

This in actual fact is calling a method with signature public void setSourceCompatibility(Object value).

The getter/setter method will be called automatically

Because Groovy will automatically call the setter (and getter) we can simplify the previous example to the following, which is more common in build.gradle:

In Groovy a closure is a block of code that can take arguments, return a value, and be passed around like a variable. This comes in really handy in our build.gradle, as it allows us to write code like this:

The signature of the method being called here is in fact void repositories(Closure configureClosure). So everything between the curly brackets is a closure, and can in fact contain any code we want.

Info: closures can also take arguments, depending on how they are called. To take an argument, define it at the start of the closure using the -> syntax. e.g. def myClosure = { value -> println value }

With the knowledge of these three language features, it becomes easier to see that Gradle build scripts appear as a DSL (domain specific language) by making the most of the Groovy syntax.

3. Gradle uses its own cache for dependencies

This means that Gradle will try to resolve any declared dependencies from these locations, in the order in which they’re defined. Once it’s fetched them, it will put them in its own cache which by default is located at ~/.gradle/caches.

Any Maven users will know that Maven uses a cache located at ~/.m2/repository. By default, Gradle has nothing to do with this.

You may, however, want to use this location for interoperability with any Maven projects you have, or to pull an artifact published by project A into project B before pushing to a central repository.

Add Maven local as a repository with this definition in your build.gradle:

Now Gradle will try to resolve any dependencies from the local Maven cache. To push to this location you’ll also need to add the Maven Publish plugin:

And then run ./gradlew publishToMavenLocal. You can double check your ~/.m2/repository directory to make sure it’s been published correctly,

5. You should always use the Gradle wrapper to execute tasks in a project

One problem that Maven developers may have encountered is inconsistent Maven versions between developers working on a project. Gradle completely removes this problem by introducing the Gradle wrapper.

The Gradle wrapper is a script that gets committed into your repository, meaning that:

It’s then very important to ensure anyone building your project does so using the wrapper:

6. Gradle has a way to convert a Maven project to Gradle

Time needn’t be a barrier to changing your Maven project to Gradle. Gradle includes a way to convert all your pom.xml files to build.gradle files. Any defined repositories, dependencies, and uses of the Maven Publish, Java, and War plugins will be converted. Sadly though, other plugins will have to be converted by hand.

You’ll now be able to benefit from Gradle’s claimed 2-10x build time speed improvements! It even works on multi-module projects, so check out the docs for full details.

7. Multi-module is easy with Gradle

Setting up a multi-module project with Gradle is straightforward and flexible. All you have to do is add a definition for it to settings.gradle file in your project root.

e.g. if I want to create a database sub-module in my customer-service project, my settings.gradlewill looks like this:

The surprising thing is that you don’t even need an additional directory or build.gradle file for this to work (although you can, if you need specific configuration for your sub-module).

To prove this works, I can now add this code to my main build.gradle:

Info: this defines a task hello in both the parent module and the database sub-module. The definition of the task is a closure (i.e. an executable block of code) that prints out the project name.

Now if we run ./gradlew hello, we see the following output:

As you can see it’s printed out the names of the modules, proving the multi-module structure works. By default when you execute a task, Gradle will execute it on all modules that have that task. For more advanced features check out the specific documentation on this topic.

These were the seven things that I wish I’d learnt about Gradle from the beginning, as they would have made the learning process a lot easier. And if you didn’t know some of these, make sure to tell your Mom.

The best place to start for more information on any of these topics, is the Gradle documentation. If you have any other tips along the same lines, please feel free to share below and maybe I’ll include them in a part 2 blog post.

7 Things Your Mom Never Told You About Gradle