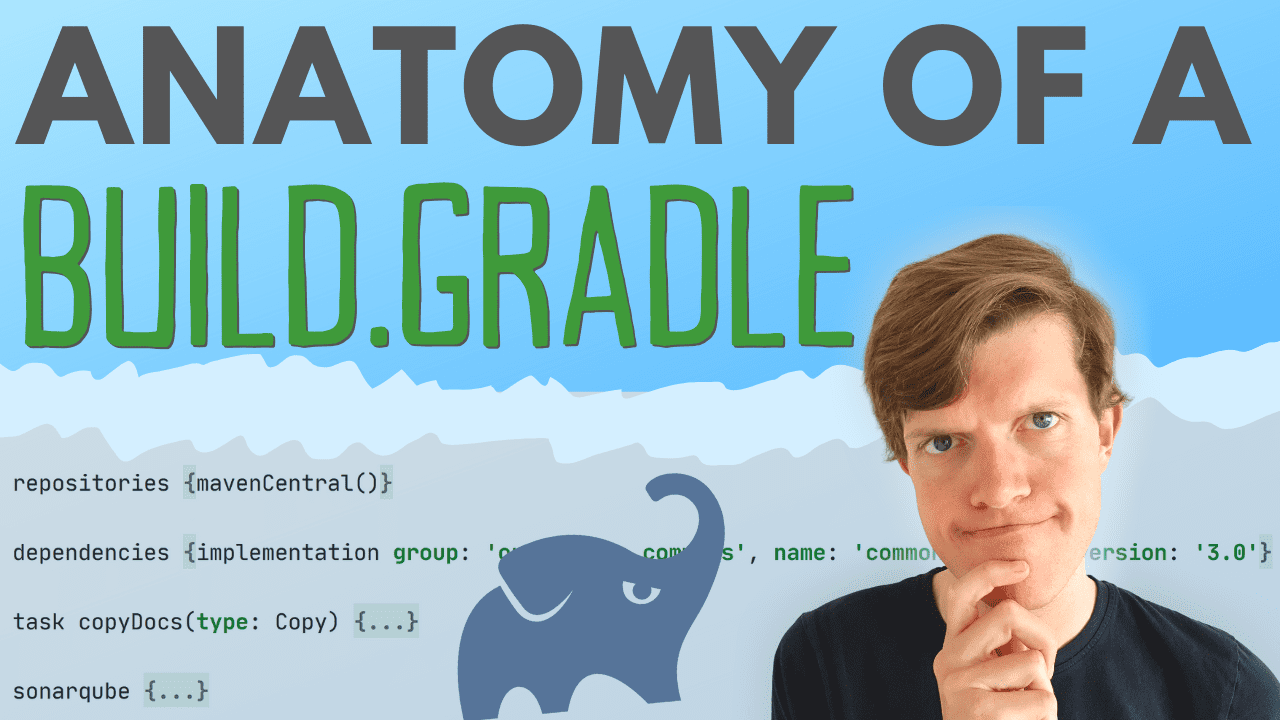 To better understand Gradle, it’s helpful to know that the build script normally consists of nothing more than the following components.

Plugins are Gradle-specific bundles of functionality to enhance how it runs your build. Define which plugins should be included like this:

There are loads of free plugins that do cool stuff in your build. ✅ Search for plugins over at the Gradle Plugin Portal.

Dependencies are requirements for building your application/library itself. For example:

The above definition says that in order to build your application, the commons-lang3 library must be added to the Java classpath (that’s what implementation means). For a full description of what is an implementation dependency see Gradle implementation vs. compile dependencies.

Tip for preserving your sanity: if you’re reading a build script for a larger project, the list of dependencies can be very long. Fortunately in IDEs like IntelliJ IDEA you can hide blocks of the build script like this, so it just shows dependencies {...}.

Not the most exciting part of the build script, but still very important, the repositories section says where you’re going to pull dependencies from.

Let’s take the commons-lang3 dependency mentioned above as an example. I happen to know that this artifact is published to Maven, like most good stuff in this world. 😊 Well you need to tell Gradle to look in Maven, which we do like this:

You can also tell Gradle to look in other places too, like:

Tasks are units of work executed during your build. They can be defined by plugins, or inline like this:

The above task would copy the contents of src/main/doc to build/doc. I don’t know why you’d want to that, but it’s just an example! 👌

Once a task is defined, it can be run using ./gradlew <task-name>.

gradlew gradle what? In case you didn’t know, gradlew is just a script you use to run Gradle in a project. It makes sure you’re running the right version of Gradle for the project. Read all about this Gradle wrapper script in this article.

Normally plugins expose specific tasks that do useful stuff in your build. For example the java plugin adds the compileJava and jar tasks, amongst others. Could be pretty handy to build a Java project don’t you think?

Usually a plugin that gets applied has its own predefined way of configuring it. For example, if I apply the SonarQube plugin:

I can then define a configuration block like this:

SonarQube what what? It’s just an example of a plugin with configuration, but since you asked SonarQube analyses your code to see if there are any problems as well as check how good is your test coverage. For full details about how to set it up in Gradle check out this article.

Based on the components discussed above, here’s a build.gradle file with the contents of each section minimised.

If you want to see a real life build file in the wild, have a look at this GitHub repository’s build.gradle file. You can even clone the project and build it, if you’re feeling adventurous. 🐯

Now you know about its basic building blocks, you should be able to better understand Gradle build files and more effectively write them. If you want to take your knowledge to the next level, check out my Gradle tutorials.

If you’re still feeling confused, I suggest you run through this official Gradle tutorial or perhaps watch the below introduction to Gradle video on the Tom Gregory Tech YouTube channel. People tell me it’s helpful!

Anatomy of a Gradle build script: the key to understanding Gradle

9 thoughts on “Anatomy of a Gradle build script: the key to understanding Gradle”