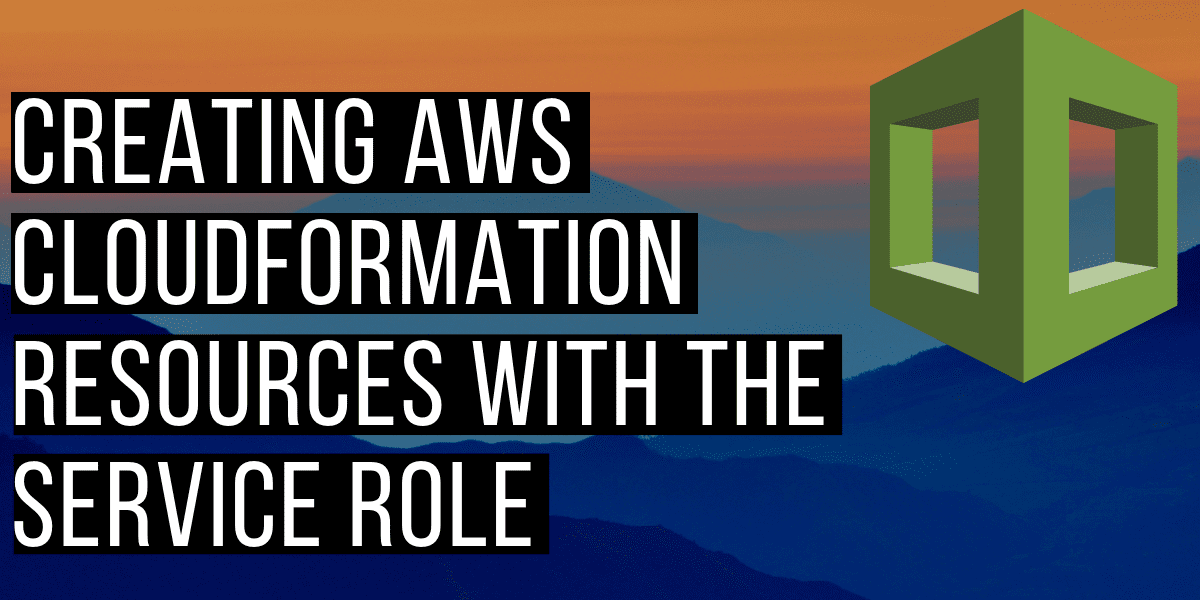 CloudFormation is a useful tool when working with AWS to define your infrastructure as code, or at least a YAML or JSON template. These templates allow us to make almost any change imaginable within the AWS ecosystem.

In this article we’ll take a look at how to practice the principle of least privilege with CloudFormation, with a working example making use of the CloudFormation service role. This will allow the CloudFormation stack to make changes by assuming that role, completely separately from the user or role who initiates the change in the first place.

When we use CloudFormation templates to deploy resources into AWS, we do that using stacks. These are self-contained groupings of resources that can be created, updated, and deleted. When you delete a stack, you delete all the resources contained within it.

When a stack is created, updated, or deleted, it’s permissions are by default defined by the role of the user that updates the stack. For example, if I want to create a stack from a template that defines an S3 bucket, my user will have to have the s3:CreateBucket permission (as well as the cloudformation:CreateStack permission).

This isn’t always desirable, if perhaps you want a user to be able to update a stack even if he doesn’t have permissions to update the resources in the stack himself.

You’ll see in the screenshot above, that a stack also has an IAM role property. This allows CloudFormation to assume a service role that grants specific permissions during the stack operation.

A service role is an AWS Identity and Access Management (IAM) role that allows AWS CloudFormation to make calls to resources in a stack on your behalf.

The diagram below how this works, in the scenario where we want to deploy a CloudFormation template that creates an S3 bucket.

IAM: stands for Identity and Access Management
Permission: defines access to an AWS resource. Implemented using policies (see below).
Role: defines a set of permissions to make AWS service requests. Users or services can assume roles to perform allowed actions.
Policy: a document used to define permissions. Can be assigned to a role. Contains actions (e.g. s3:CreateBucket) and resources (e.g. specific bucket ARN or * for all buckets).
ARN: Amazon resource name or unique identifier for a resource.

Here’s a working example that will show you how to create a stack with a service role. It will demonstrate how that service role is then used to limit or extend what permissions the stack has, beyond the permissions of the user creating the stack in the first place.

3.1. Setting up a CloudFormation user

We’ll start by creating a user. In this example, we’ll use this user to create our CloudFormation stack:

The response will contain the access key and secret key:

Use this information to run aws configure --profile cloudformation-user and configure a new profile.

Now we’ll be able to append --profile cloudformation-user to any AWS CLI command to run the command as this user. We’ll do that on any CloudFormation stack commands from this point onward.

Currently this user can’t do anything in AWS. Not very useful! Let’s create a policy for this user which will allow them to:

Create a file cloudformation-user-policy.txt with the following contents:

Then run the following command to attach the above policy to the cloudformation-user:

Info: the command above attaches an inline policy to the user. This policy is only attached to a single entity, whereas a managed policy is standalone and can be attached to multiple entities.

Create a file called stack.yml which should contain the CloudFormation template below which defines an S3 bucket resource.

Info: S3 is an AWS storage service, and an S3 bucket is just a repository where files can be stored.

Apply the stack using the AWS CLI. We’ll be using the cloudformation-user to run these stack related commands:

This will create the stack in AWS, which will automatically try to create the S3 bucket. To query the stack status, just run the following command:

Unfortunately you’ll see that eventually there was a problem, and the stack is in the ROLLBACK_COMPLETE status. To see what happened we need to look at the individual events that happened to the stack:

You can see here that we have a resource status CREATE_FAILED, with the reason that access was denied to s3:CreateBucket. This is fair enough, considering our cloudformation-user doesn’t have this permission. At this point we have 2 options:

Info: the document above is just saying that the cloudformation.amazonaws.com service can assume the role to which this policy is attached.

Next up, create a role passing the assume role policy document we just made:

Now all that’s left is to attach a policy to the role which gives the role the s3:CreateBucket permission. We’ll also add s3:DeleteBucket, so that you can clean up the stack later on. Let’s put that in a file called cloudformation-role-policy.txt:

3.5. Running the CloudFormation changes with the service role

Now it’s time to pull it all together, and create the stack again but this time with a role which the CloudFormation service will assume to create the S3 bucket resource. Let’s first delete the previous stack:

And now run the same create-stack command, but this time with the role-arn parameter specified:

Check the stack status again, and this time after a while it should be CREATE_COMPLETE:

If you run aws s3 ls you can see your new bucket has been created!

If you like to clean up after yourself like me, you can issue the following commands to delete all the resources we’ve just created:

This can be particularly handy if, for example, you have a continuous integration (CI) server that is creating or updating CloudFormation stacks. You can limit the permissions of the CI server to create or update a stack. The stack itself will use a different role, giving it the permissions to create whatever resources it needs to.

Clone this GitHub repository to get all the files mentioned in this article.