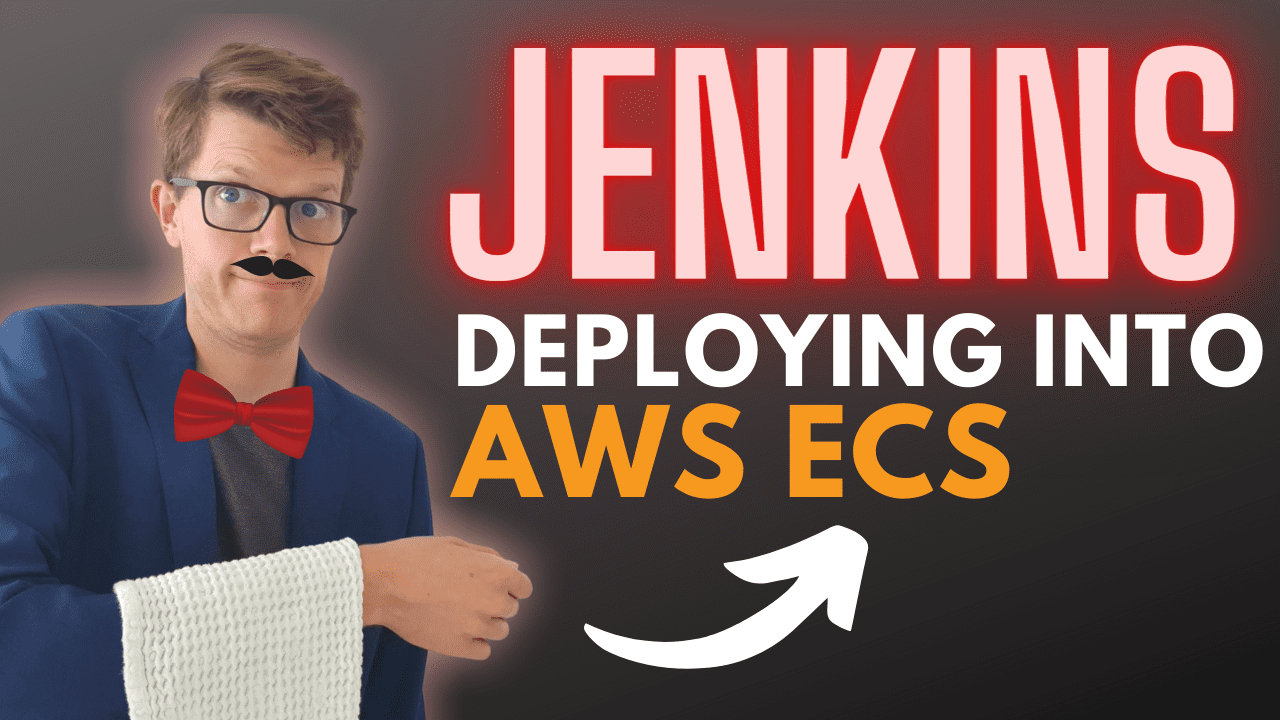 Deploying a continuous integration service such as Jenkins is an important step when kicking off your development project. In this article you’ll discover how to deploy Jenkins into the AWS Elastic Container Service (ECS), meaning you’ll have your own highly available Jenkins instance available to you over the internet.

We’ll be following all the best practices to get Jenkins production-ready, including making sure:

This wish list is not difficult to achieve when using services from a cloud provider such as AWS. First though. let’s get an understanding of how Jenkins works before figuring out how to deploy it to AWS.

This is the first article in this three-part series about deploying Jenkins into AWS. Here are details of all three articles:

This diagram describes a common Jenkins use case, where we need to run jobs that build software whose code is checked out of a version control system such as Git.

Jenkins is designed to run a single master node responsible for serving the web UI, handling configuration, running jobs, and managing interactions with slave nodes. Jenkins slave nodes also run jobs, and they allow for horizontal scalability since you can have many resource intensive jobs running at the same time without affecting the master node.

Also bear in mind that:

To keep things focused, for this article we’ll aim to deploy a single master node for running jobs. Executing jobs on slave nodes will be covered in a follow-up article.

Why would you deploy Jenkins into ECS?

AWS ECS is a container orchestration framework much like it’s better-known more fashionable cousin Kubernetes. ECS provides everything you need to deploy services as Docker containers, including handing scaling, failover, networking, and security.

The other nice things about ECS are:

If you know that AWS is the cloud provider you want to use in the long-term, then for getting a service such as Jenkins deployed ECS is an ideal choice. 👍

AWS has a lot of magical acronyms and terms that can sometimes send your head in a spin. Let’s get the relevant ones out in the open before continuing.

A Jenkins solution in ECS

OK, so we’ve given ECS the thumbs up, but let’s think about what specific features we can use for our Jenkins deployment given the constraints of the Jenkins architecture described earlier. The following points are marked on the diagram below, ‘cos I’m nice like that.

1 Integration with Application Load Balancer (ALB) – the only access point into Jenkins should be via an ALB which serves the Jenkins UI over HTTPS on port 443. An SSL certificate will be provided to the ALB for the domain we want Jenkins to be available on. Registration of ECS tasks into the ALB is handled automatically by ECS.
2 Integration with Security Groups – the Jenkins ECS service should be assigned a security group that only allows access on the Jenkins port (8080) from the ALB. We’ll provide full outbound internet access to Jenkins in order that updates and plugins can be installed.
3 Persistent storage – AWS now offers tight integration between ECS tasks and the Elastic File System (EFS) service, meaning our Jenkins data will be safe if the container gets stopped for any reason.
4 Failover – because our Jenkins instance runs as a single master we can’t run multiple instances of it, so it will be deployed into a single availability zone. Although problems with an AWS availability zone are rare, we can provide redundancy by creating an ECS service which spans multiple availability zones. This way, Jenkins will automatically recover if the availability zone it’s running on fails.

Traditionally the Elastic Block Store (EBS) is the storage type to use when attaching a volume to an EC2 instance. This won’t work for our use case, because:

Fortunately though, the Elastic File System (EFS) can run in Fargate (as of April 2020) and its volumes can exist in multiple availability zones, which is why it’s our choice for this article.

To keep this article on-point, I’ll explain just enough information about attaching EFS to Fargate so that you can understand the main concepts. Sound fair?

EFS is an Network File System (NFS) type file system. It can be attached to one or many devices at the same time, each of which can read and write data. In the case of Fargate, you can attach an EFS file system to multiple ECS tasks.

The way this works with Fargate is using another resource that you have to create called a mount target. A mount target has its own network interface and therefore IP address, and it’s via the mount target that an EFS resource is attached to a Fargate container.

As already mentioned we’ll only have one Jenkins master running at once. But, these EFS features are very helpful to ensure Jenkins can come back automatically with the same data should an availability zone fail.

Deploying Jenkins into ECS with CloudFormation

Let’s get this show on the road by deploying all the AWS resources required to implement the solution above, using the AWS templating engine CloudFormation.

I recommend first reading through the descriptions that follow so you know what AWS resources you’re deploying. But, if you’re a super-keen eager beaver, jump right in by hitting Launch Stack below. This will create the CloudFormation stack in your own AWS account, resulting in a running Jenkins instance deployed in a new VPC and ECS cluster, available over the internet.

Full details of what to do when you click the Launch Stack button are given in the section Launching the CloudFormation stack in your AWS account.

First though, let’s run through the two template files that make up this infrastructure deployment.

Stack one: VPC and networking

This nested stack (default-vpc.yml) contains all the resources to create a standard VPC setup:

To learn more about these AWS resources, see my guide VPCs, subnets, and gateways – fundamentals for working with containers in AWS.

A nested stack is a reusable CloudFormation template. Because we’re using a standard setup for the VPC/networking this has been extracted out into a separate nested stack, which can also be reused in future articles.

This main stack (jenkins-for-ecs.yml) references the nested stack created above, then it defines all the ECS resources required to get a Jenkins ECS service running, and hooks it into a load balancer.

Our ECS cluster will be given the name default-cluster. Imaginative, I know!

The Jenkins ECS service will be responsible for making sure the task (i.e. the container) is running, and it also manages networking:

After the stack has been created, on the stack details page select the Outputs tab and copy the value from LoadBalancerDNSName. This is the DNS name of the load balancer created by CloudFormation.

Then add the copied value into your DNS through whatever tool you use (AWS or otherwise) as a CNAME record.

Now you know what resources are created in the CloudFormation templates you can go ahead and deploy the example using the Launch Stack button below:

When you click this button you’ll be taken to the Quick create stack page in your own AWS account.

AWS will now go off and do its business, the infrastructure type business that is.

Go to Services > CloudFormation and you’ll see your CloudFormation stacks in the process of being created. After about 5 minutes all the stacks should be in the UPDATE_COMPLETE state.

The CloudFormation I’ve supplied here deploys an example of a production ready Jenkins service into a new VPC. In applying this to your own production infrastructure, I suggest:

Getting started with the Jenkins instance

If you’ve applied the CloudFormation stack described above you’ll now have a shiny new Jenkins instance running. Be patient as even when the stack has applied Jenkins still takes a couple of minutes to start up. ⏰

You can access Jenkins using the ALB DNS name described in the Certificates & DNS setup section above, although you’ll have to accept the “Your connection is not private” warning about an insecure certificate. If you’ve setup your certificate and DNS correctly though, you’ll be able to access Jenkins with a valid certificate for the domain, which will look like this:

Grab the admin password by navigating to the ECS Task and clicking on the Logs tab. The password will be printed in the logs the first time Jenkins starts up. Look for the log line “Please use the following password to proceed to installation”.

Copy the password, paste it into Jenkins, and you’ll be off and away with the Jenkins setup wizard:

Once you’ve followed this through, you’ll have a Jenkins instance ready to start running some jobs!

Since the intention of this article is to create a production-ready Jenkins deployment, let’s put our money where our mouth is and test some disaster recovery scenarios.

Scenario: the Jenkins ECS Task gets stopped for some reason

Test: go to the list of tasks in the cluster, select the Jenkins task, then click Stop

Observation: ECS restarts the task and Jenkins is available again in 2m00s. ✅

This is a real “squeaky bum time” scenario where an entire AWS availability zone datacentre goes down.

You can identify which availability zone your ECS task is running in by going to the task details page and clicking on the ENI Id under Network:

This opens up details of the Elastic Network Interface (ENI) which our ECS task uses to connect to the network and internet. Under Zone it tells us which availability zone this ENI and associated ECS task are in.

In my case I know then that I need to simulate a failure of eu-west-1a.

In the main CloudFormation template jenkins-for-ecs.yml it passes a list of subnet ids through in the NetworkConfiguration section of the JenkinsService resource:

All we need to do is tweak this list so that it only contains PrivateSubnet2, which lives in the second availability zone in your region (in my case eu-west-1b).

Once this change is applied the ECS service creates the ECS task in the remaining subnet, and the Jenkins instance is available again in 2m28s. ✅

Making these changes yourself

Download the original jenkins-for-ecs.yml template and make the above code change. To apply it, go to Services > CloudFormation, then select the stack and click Update. You can then select Replace current template and upload the file. Keep clicking Next then on the final screen click to say you accept the additional capabilities, then click Update stack.

Even though now you have created a production-ready Jenkins instance which is secure and highly available, there’s still some way to go before you have a full continuous integration solution in place. Check out the next article in this series Running Jenkins jobs in AWS ECS with slave agents where we’ll learn how to horizontally scale Jenkins workloads by running jobs on slave agents.

As a final point, if you followed the example in this tutorial don’t forget to delete the CloudFormation stack once you’re finished with it, to avoid incurring unnecessary charges.

The CloudFormation stack can be applied directly to your AWS account by clicking below:

There were two templates used in this article:

The Docker image used in this article was jenkins/jenkins, available on Docker Hub

Check out the accompanying video over on my YouTube channel

Deploy your own production-ready Jenkins in AWS ECS