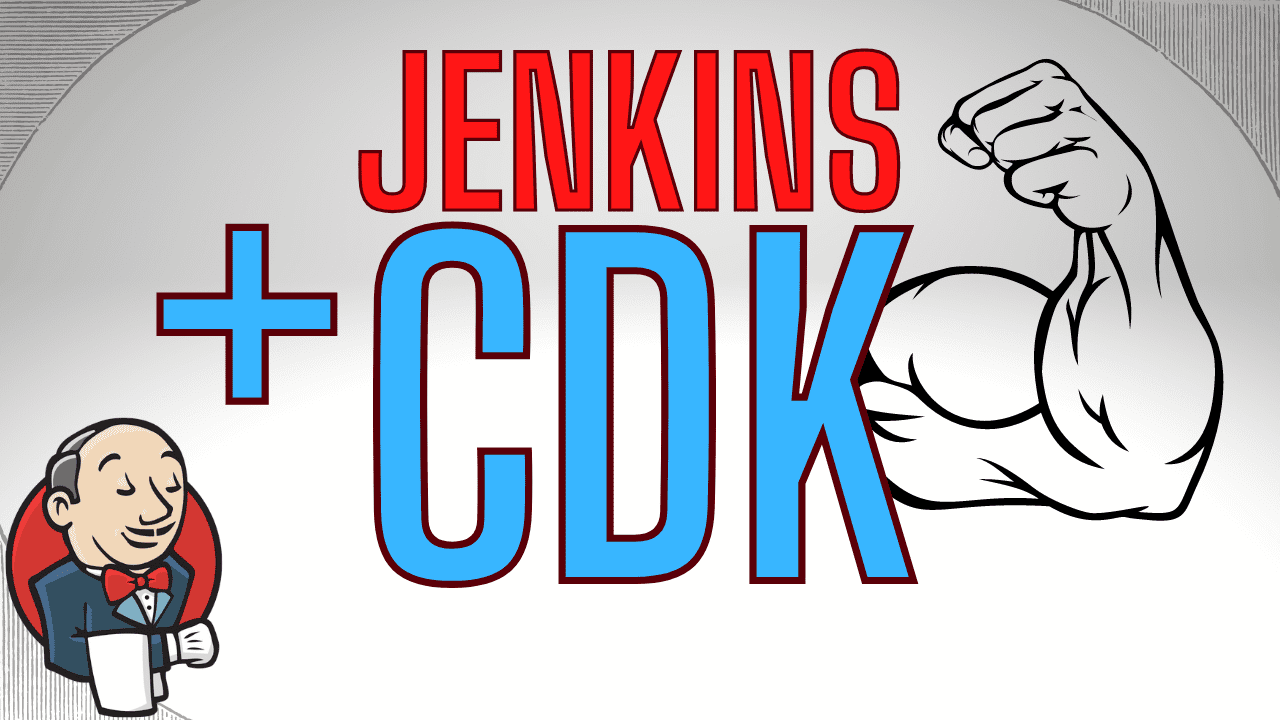 Deploying Jenkins into AWS ECS requires careful consideration to make sure you’re following best-practice. In the article Deploy your own production-ready Jenkins in AWS ECS a sample CloudFormation template was provided, taking away much of the heavy lifting. Still, the CloudFormation template was verbose and potentially difficult to understand. In this article, you’ll learn how to deploy a production-ready Jenkins instance in just a few lines of code, using the power of the AWS Cloud Development Kit (CDK).

AWS CDK is a framework designed to address some of the shortcomings of CloudFormation. The 3 main benefits in using this framework are:

In simple terms, CDK is a tool for dynamically generating CloudFormation through code, adding in a lot of best-practices along the way.

If you want to follow along with the examples in this article, you’ll need npm and cdk installed on your machine, so check out this getting started guide.

We’re going to be deploying this Jenkins master architecture into AWS.

This architecture provides a Jenkins master with secure access from the internet, with persistent storage, and automatic failover to another availability zone in case of disaster. Importantly, this solution is also serverless as it runs in AWS Fargate. Full details of the architecture are described in Deploy your own production-ready Jenkins in AWS ECS.

To create the above architecture, we’ll need to create following AWS resources.

The full project is available to download and run from the tkgregory/aws-cdk-examples GitHub repository. Before you do that though, let’s run through this implementation step-by-step so you understand what will get deployed and how.

The CDK app is called jenkins-master, and is written in the TypeScript language. The file containing all the deployment details is jenkins-master-stack.ts, which we’re going to step through

We’re going to use several different CDK modules, each of which represents an area of AWS e.g. @aws-cdk/aws-ecs.

The import statements make these modules available to us within the declared JenkinsMasterStack class, shown below. This class contains all our AWS CDK object definitions, which will later get used to generate a CloudFormation template to be applied to an AWS account.

Creating a VPC is super-simple in CDK. It also creates public and private subnets, internet gateways, and NAT gateways. Like I said, sensible defaults 👍.

The Elastic File System (EFS) setup includes the actual EFS AWS resource, plus an access point with the correct path and access configuration. In the background CDK also creates the necessary mount targets, which are the IP addresses used for access to the filesystem, plus the related security groups.

The sample code above sets the EFS removal policy to RemovalPolicy.DESTROY. If you’re deploying into a production environment, please delete this line to ensure the filesystem remains even if the CloudFormation stack is deleted.

The task definition describes how the Jenkins ECS task will get run, including:

The service in this case is a FargateService and we configure how many Jenkins instances we need to run. Importantly, we also enforce a maximum of 1 Jenkins master to run at the same time, to prevent any unexpected behaviour with multiple Jenkins masters accessing the same filesystem.

To enable Jenkins to access the file system, the last line below sets up a security group rule between the security group of the ECS service and that of the EFS file system. CDK automatically adds the relevant rules to both security groups, helpfully solving a common headache.

This section creates the load balancer and registers our ECS service with it.

In CDK context values are key/value pairs which can be associated with a stack. They can be passed on the cdk command with --context <key>=<value>, which you’ll see later on when we get to the deployment stage.

This final section registers the load balancer into DNS, so Jenkins can be accessed on a friendly URL.

At this point we’re almost ready to deploy the CDK app into AWS.

First, we need to ensure the following environment variables are available to tell CDK where we’re deploying to:

And we need to determine what values to pass for these context values:

First we need to installs the required packages:

And then we can do the deployment:

This performs the following steps:

When you see this confirmation dialog enter y.

After a few minutes the deployment should succeed. Within the CloudFormation area of the AWS Console the JenkinsMasterStack will show in a completed status.

Jenkins will be available at https://jenkins.<your-hosted-zone-name>. If you didn’t provide a HostedZoneId you can access Jenkins at the load balancer’s DNS name, which you can get from the CloudFormation stack output named LoadBalancerDNSName.

To get the initial password required for login, you can view the ECS task logs from the ECS dashboard, or view the equivalent logs in CloudWatch logs.

Once you’ve logged into Jenkins and gone through the setup wizard, you can go ahead and create jobs. You can also test that the Jenkins data is persisting as expected by killing the ECS task, waiting for a new one to spawn, then verifying that your data is still available.

Let’s compare the volume of code required for the Jenkins CDK deployment to the CloudFormation version used in Deploy your own production-ready Jenkins in AWS ECS.

CDK is the clear winner here, requiring 50% fewer lines of code to achieve the same outcome!

Don’t forget to tear down your CloudFormation stack to avoid unnecessary charges, which you can do from the CloudFormation console or by issuing this command.

Pass in the same context parameters you used for the deploy command, so that CDK knows what needs to be deleted.

You’ve just seen how to deploy a Jenkins master into AWS ECS using CDK, which makes light work of what would otherwise be a complex deployment. If you’re interested to learn how to take Jenkins one step further with CDK, then sign up to the newsletter to keep up-to-date with upcoming articles.