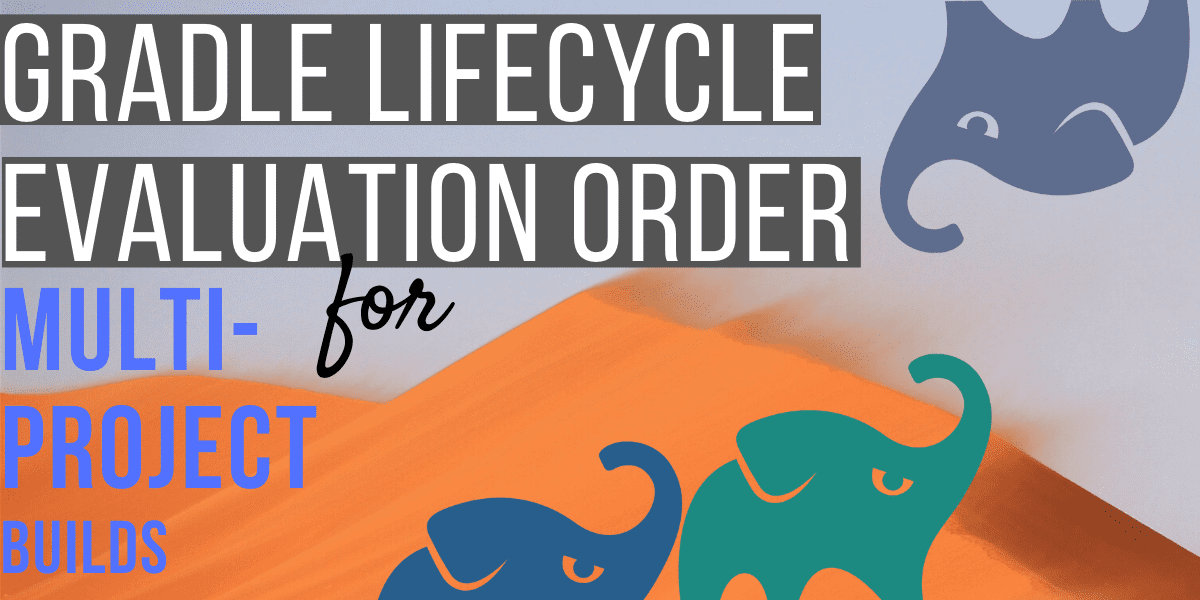 Multi-project builds in Gradle provide a better way to organise your project in the event that your have multiple artifacts to be created or deployed. In simple use cases everything is easy to understand and works without issue. But, as soon as you start to use some more advanced Gradle features we need to look under the cover to better understand how the multiple projects work together within Gradle’s lifecycle.

In this article you’ll learn about the evaluation order of a multi-project Gradle build, and how to set things up to work the way you want them to.

Gradle multi-project builds, or multi-module builds as they are known in Maven, are pretty easy to setup and use. Here’s a quick recap, where we’ll build up and example project called gradle-evaluation-order.

Tip: if your fingers are tired after a hard day’s coding, you can get download all the example code, ready-to-go, from this GitHub repository.

1.1. Adding sub-projects to a Gradle project

Let’s create a new Gradle project gradle-evaluation-order. The easiest way to do this is to run gradle init, which will add a build.gradle file in the root directory and setup the Gradle wrapper.

Edit the settings.gradle file in the project root directory. Add the include statement to include whatever sub-projects you want:

This is in fact all that is required. Note that:

You can now run ./gradlew projects to show that the new sub-projects have been added:

1.2. Configuring the sub-projects to do something useful

Now that we have some sub-projects, there are 2 approaches to getting them to do something useful:

Configuring a sub-project from the parent build.gradle

To configure sub-projects from the parent build.gradle (option 1 above), we could add this code:

Info: the allprojects method in this snippet allows us to run build code against every project. For every project we’re adding a task hello, which prints out the project name. Note that the $project variable in this example refers to the current sub-project that is being evaluated.

When we execute ./gradlew hello we get the following output, printing the name of each project:

Configuring a sub-project from its own build.gradle

Extending our example, we’ll add a directory sub-project-1, and add a build.gradle within there, containing this code.

Now when we execute ./gradlew hello goodbye we get the following output:

Time to lift off the covers and see what’s really happening with our multi-project builds. First though, as a reminder, remember that the Gradle build lifecycle includes three distinct phases:

To show these phases in action, we’ll add a println statement to the settings.gradle:

And add a println statement to sub-project-1/build.gradle:

Lastly let’s add a println statement in the parent build.gradle, in the allprojects block:

Now if we run ./gradlew hello we get the following output:

You can clearly see the 3 distinct phases, including tasks being executed in the execution phase.

There are 2 keys things to note here though:

Now that we understand how multi-project builds get executed, what can we do about it? Consider a scenario where we have a plugin definition as follows, defined in buildSrc/src/main/groovy/com/tom/SmallTalkPlugin.groovy:

This plugin prints out a How are you? greeting.

So take a guess, what should we get when we run ./gradlew makeSmallTalkToTom?

It turns out that since the plugin is being applied before the configuration properties have been applied to the SmallTalkExtension class, recipient is null.

We can verify this from the output of ./gradlew tasks --all:

Clearly the recipient configuration property has not been created by the point when the task is created, resulting in a task named makeSmallTalkTonull.

Thankfully the boffins over at Gradle HQ thought of this scenario and have provided us with this method signature available on the Project class:

Whatever closure is passed in will be executed after the project has been evaluated i.e. at the end of the configuration phase of that project.

Info: a closure is a block of code that can be passed into methods and executed

Let’s change the plugin definition to include the afterEvaluate method:

Now the task won’t be created until the end of the configuration phase, after the recipient property has been set. When we run ./gradlew makeSmallTalkToTom we get the expected output:

We saw earlier that the configuration phase of the Gradle build evaluates the parent project before any sub-projects, in what Gradle calls a breadth-wise ordering.

This is good for most scenarios, but what if we wanted the sub-projects to be configured first, before the parent? Why would we want to do this in the first place?

Let’s take a brand new example (code available in a separate GitHub repository). We have a parent project with 2 sub-projects, each with their own build.gradle:

Sub-project-1 has task doThing1 defined in its build.gradle:

And sub-project-2 has a definition for task doThing2:

Simples. When we run ./gradlew doThing1 doThing2 we see the following output:

No surprises here then. However, say we have a new requirement:

doThing2 must run before doThing1

We may want to configure the order in the parent build.gradle using the mustRunAfter method, like this:

Info: mustRunAfter specifies an order, but not a dependency. So, if Gradle determines that 2 tasks should run, then the mustRunAfter relationship sets the order.

What happened? Well, unfortunately we tried to configure the ordering of the tasks before the tasks themselves had been created. That’s what you get with breadth-wise evaluation.

As always, the clever Gradle folk have a solution to tame the elephant. This time, we have an option to force Gradle to evaluate the child build.gradle files before the parent:

Declares that this project has an evaluation dependency on each of its child projects.

Let’s try this out then, but adding this new method call to the top of the parent project’s build.gradle:

Now when we run ./gradlew doThing1 doThing2 we get the desired output, with doThing2 executing before doThing1:

There’s a lot to take in here, but let’s wrap it up into 3 takeaways to remember:

Why not try to apply these concepts in your own project to control the execution of your build?