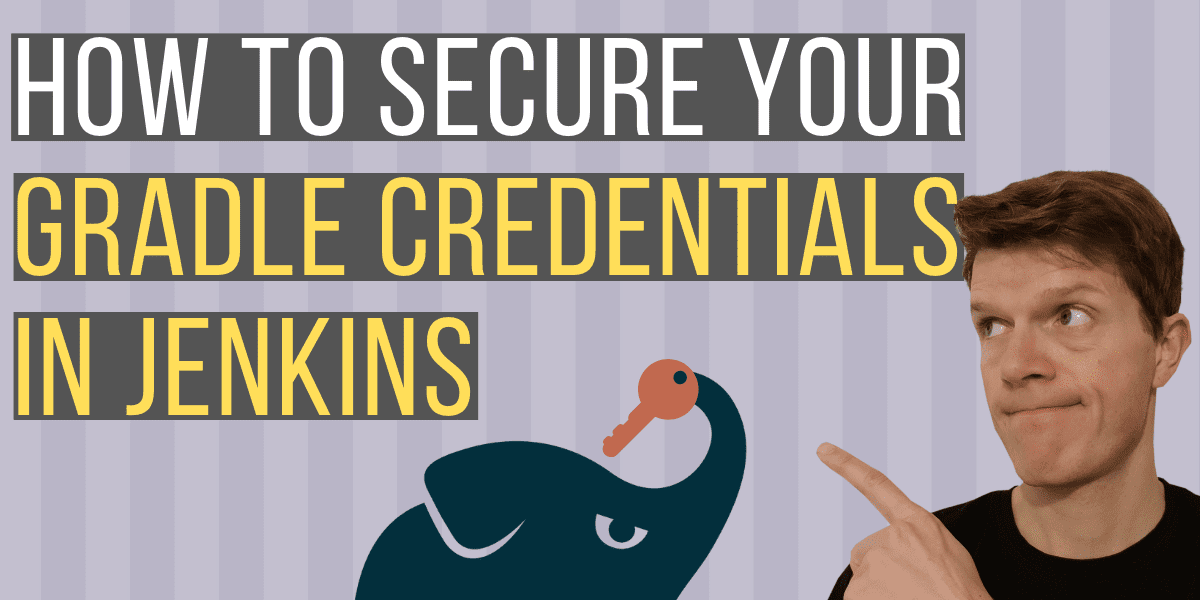 If you’re using Jenkins to build your projects, one scenario you may have come across is where you need to connect to a secure repository to publish or pull an artifact. Credentials will be required in this scenario, and a common mistake is to insecurely store these credentials in version control. In this article you’ll learn how to securely setup credentials for your private repository using Jenkins credentials, and inject them into your Gradle builds.

Before we get into a working example of exactly how all this fits together, it’s worth asking a question as to why we want to do this in the first place.

Why store credentials in Jenkins?

When we use Jenkins as a build tool, normally it needs to perform various tasks that might require credentials, such as:

The credentials required for these tasks need to be stored somewhere, and more often than not the default place developers think to put them is in the same place as the code that executes the task. A common location for this might be a Gradle build.gradle file that then gets committed into version control.

Case study: an interesting example of this security vulnerability is the Uber attack. Hackers managed to gain access to the Uber GitHub repository where some AWS credentials were stored, giving them access to data storage instances on AWS.

What do we mean by Gradle credentials?

Using this technique we can then depend on Maven artifacts that have been deployed to a password protected repository, typically a private repository that we own.

We can make an improvement here by pulling out the username and password to a gradle.properties file which normally lives in your user home directory:

This is definitely an improvement, as the gradle.properties file isn’t typically something you commit to version control. We can go one step further by not relying on the credentials being stored in a file at all. Instead, we’ll have Jenkins inject them directly into the build as environment variables, providing a much more secure solution.

The following diagrams summarises what we’re trying to do here:

We want to achieve the following:

Just tell me what to do: to demonstrate the above we’ll use a working example, but if you want to just see how to apply this to your own project right away, skip to sections 2.2, 2.3, 2.4, and 2.5.

To show how this works we’ll need the following services running:

The easiest way to get the first 2 up and running is to use Docker. You can follow along with this example by checking out this GitHub repository:

Run docker ps to see what containers are now running:

Info: Archiva is a Build Artifact Repository Manager by Apache. It supports the Maven format, so allows us to publish artifacts to it, and pull artifacts from it.

By default Archiva allows access as it’s guest user. Since we want to demonstrate gaining access to a private repository using credentials provided by Jenkins, we’ll have to disable this user.

4. Some new options now appear on the left hand side. Select Manage under Users, then select the Edit button for the Guest user.

6. Uncheck the Repository Observer permissions for the snapshots and internal repositories. Click the Update button.

You now have a Maven repository setup that requires credentials to be able to push to it and pull from it. For simplicity, we’ll use the admin credentials in Gradle, but in a real life scenario you’ll want to setup a separate user.

Moving over to Jenkins, let’s get the Maven repository credentials setup.

Get the right plugins

There are 2 plugins that we need:

These plugins can be installed by going to Manage Jenkins > Manage Plugins. If you’re following along with the example GitHub repository, the plugins are provisioned automatically in the Docker image.

You can see if the correct plugins are installed on the Manage Plugins screen and clicking on the Installed tab:

5. Finally! Now it’s time to add the credentials! We need to enter three pieces of information:

6. Click the OK button, and you’ll see this confirmation screen.

2.3. Using Jenkins credentials to publish an artifact with Gradle

Let’s jump into Gradle and have a think about how we’ll be able to use an environment variable passed in from Jenkins to connect to the Maven repository.

Imagine you have an artifact that is built by your Gradle project, say a jar file. In order to publish that to a Maven repository we’ll need to add the Maven Publish Plugin to our build:

With this plugin added, we get an additional gradle task available to us, publish. Before we execute this task though, we need to add some additional configuration.

Here we’re defining what the Maven artifact’s group id, artifact id, and version will be. The from components.java tells the plugin that it should publish the output from the Java plugin, i.e. the jar file.

We also need to tell the Maven Publish Plugin what repository to push to, by adding this additional configuration block inside publishing:

There are 3 parts to this:

Assuming we have the specified environment variables in place, it’s just a case of running the following command to publish the artifact to the Maven repository:

Info: if you’re following along with the GitHub repository example, all of the Gradle build configuration is setup for you by default. Take a look at artifact-to-publish/build.gradle, then later on I’ll show you exactly how to demonstrate this working within Jenkins.

2.4. Using Jenkins credentials to pull an artifact with Gradle

Now that we can publish to a Maven repository, it’s time to pull from it.

To show how this works, imagine you have a very simple project that has a dependency on a Java class within a jar file deployed to your private Maven repository. This is a very common scenario, and normally the dependency is expressed in a build.gradle like this:

To pull a publicly accessible 3rd party library from somewhere like the Maven Central repository, we would ordinarily add mavenCentral() to the repositories configuration. But, since we’re using our private repository we’ll need this configuration:

This is very similar to the configuration we had above for the Maven Publish plugin, and consists of:

Assuming we have the specified environment variables in place, it’s just a case of running the following command to build the Gradle project, which will automatically pull the required dependency from our private Maven repository:

Info: if you’re following along with the GitHub repository example, all of the Gradle build configuration is setup for you by default. Take a look at project-to-build/build.gradle, then later on I’ll show you exactly how to demonstrate this working within Jenkins.

Now that we’ve got the Maven repository credentials configured in Jenkins, and our Gradle build is expecting the credentials to be passed in as environment variables, we just need to glue the two together.

That’s why we added the Credentials Binding Plugin mentioned earlier, so that we can bind the credentials to environment variables for use in a pipeline build step. Normally the pipeline is defined inside a file called Jenkinsfile:

The call to credentials in the snippet above is referencing the id of the credential we added earlier in Jenkins. We’re assigning it to an environment variable called ARCHIVA, but because this is a username & password pair a bit of Jenkins magic happens. We actually get both ARCHIVA_USR and ARCHIVA_PSW environment variables.

2.6. Bringing it all together

If you’re following along with the accompanying GitHub repository, it’s finally time to see this all working. Just to double check, now you should have:

If you go to the Jenkins home page you’ll see we have a predefined job setup here, called seed-job:

This job is going to create 2 additional jobs for us, to demonstrate the publishing to our private Maven repository, and the pulling from it. Click on seed-job and click Build Now to execute it. Go back to the Jenkins home page and you should now have 2 additional jobs available.

The publish job will run a Jenkins pipeline which runs ./gradlew publish. The credentials are injected as environment variables as described in the previous section of this article (here’s the pipeline definition).

Click on the job and execute it by clicking Build Now. This may take a while as it downloads the relevant Gradle libraries from gradle.org.

Go to the build that just executed and check the console output.

Importantly you’ll see that it published the artifact to http://archiva:8080/repository/snapshots.

We can also validate this by logging into Archiva at http://localhost:8081 as admin, then browsing the snapshot repository.

Now we’ve successfully published an artifact using Jenkins credentials, let’s run a Gradle build which has a dependency on that artifact.

The gradle-build-with-credentials job similarly injects the credentials as environment variables for the Gradle build to access (see the pipeline definition).

This particular job builds a Java project which depends on a class that lives in the artifact we just published in the previous section (specifically, this class depends on SpecialService).

From the Jenkins home page click on the gradle-build-with-credentials job. Hit Build Now to execute it. The build should finish successfully. Since this build has a dependency on the artifact , this proves that the artifact has been pulled correctly from Archiva with the correct credentials.

Now you can easily avoid committing credentials into your version control, making your software projects and infrastructure much more secure.

If you have any questions about the working example, or any problems getting it up and running, please let me know in the comments below.

GITHUB REPOSITORY
Follow along with this article by checking out the accompanying GitHub repository.

How To Secure Your Gradle Credentials In Jenkins

4 thoughts on “How To Secure Your Gradle Credentials In Jenkins”