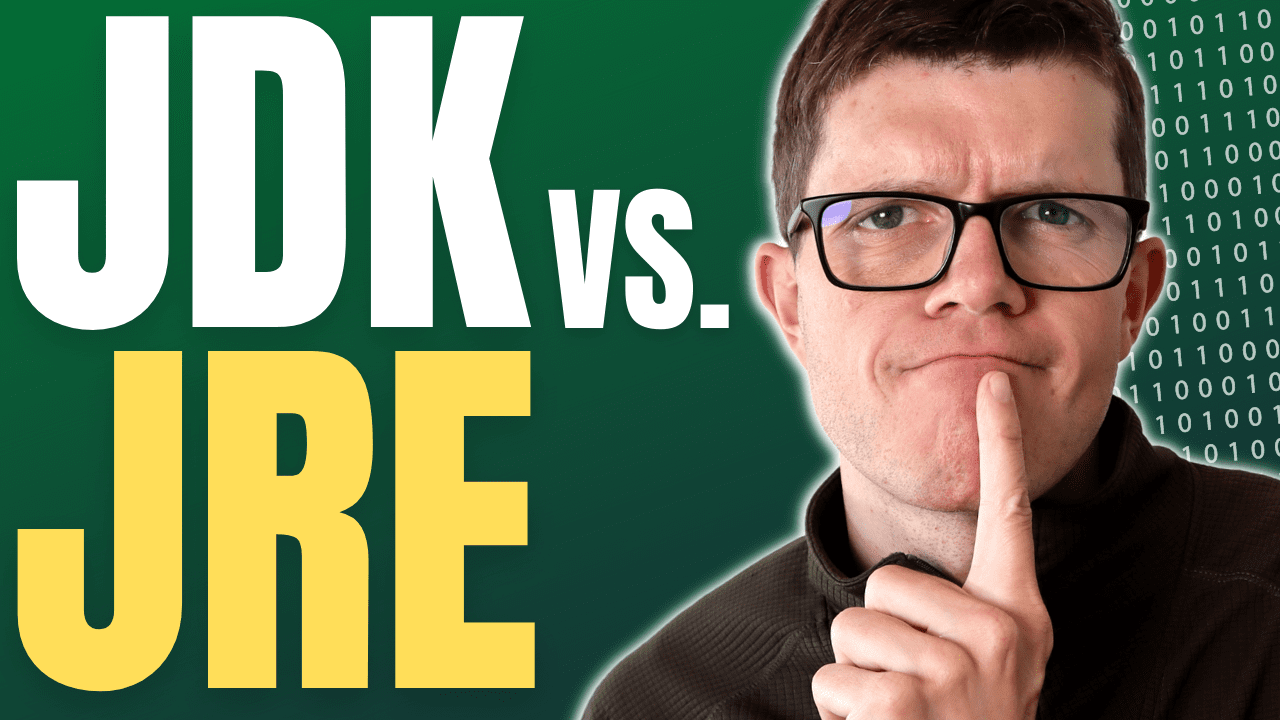 For many Java developers, understanding how the JDK & JRE differ is a source of confusion. But knowing when to use each one is essential to develop and run Java applications effectively. In this article you’ll discover why the JDK & JRE exist, their differences & similarities, and practically how to use them.

Let’s begin with a quick overview of the JDK & JRE to get a taste of what they’re about.

The JDK (Java Development Kit) is a library which you download to your computer to help you develop Java applications.

What kind of library? Whether you use an installer, package manager, or zip file to setup the JDK, you end up with a directory structure like this.

What the heck is all this stuff? It’s a suite of juicy tools to help you do an awesome job as a Java developer.

For example, in the bin directory are these programs:

There are in total 35 tools in the JDK bin directory, including JConsole, used to monitor Java applications. Have a look yourself and try running them!

Let’s compile something using the JDK

One of the most important tools in the JDK is javac. Without it you wouldn’t be able to compile your source code to later run using the JRE (more on that later).

We just pass the file name to javac and the compiler spits out a .class file.

Full path? If you don’t want to specify the full path to your JDK, then setup your PATH environment variable as described in this tutorial.

And what’s so great about a .class file?

Well, it’s important to know that the JVM (Java Virtual Machine) receives instructions through bytecode (.class files) and NOT source files (.java) files. Bytecode has been optimised and compressed specifically for the JVM to run as fast as possible.

We’ll learn more about the JVM later when we use it to run our HelloWorld application.

While the focus of the JDK is on developing Java applications, the JRE (Java Runtime Environment) is all about running them. It’s a library which you install on any machine you need to run Java programs.

What sort of library? Here’s what we see if we list of the contents of the JRE.

This is the minimum set of files needed to run any Java application. The most important is java.exe inside the bin directory. Use the java command to execute Java application .class files.

When you do this, a JVM starts up to execute statements contained within .class files. So you can think of JRE as containing the JVM, but more accurately the JRE has the libraries to start the JVM.

What else is in the JRE?

Also in the JRE are many libraries that Java applications may rely on at runtime. You’ll probably be familiar with some of them, for example:

But note that the JRE doesn’t include any of the development tools like javac and jar. That’s what the JDK is for. The JRE is only for running Java applications.

Let’s run something using the JRE

Let’s put the JRE to the test and get it running something!

Remember that we compiled HelloWorld.java into HelloWorld.class earlier using the JDK? Running it in the JRE is as simple as passing the class name to the java command.

Awesome! We got the expected output. Every Java application starts here.

Which JRE? The JDK & JRE examples in this article are using the Eclipse Temurin JDK build. See below for more details.

But when we run java there’s quite a lot happening in the background just to print a simple string:

So we’ve compiled an application using the JDK and run it with the JRE. Are we all done here?

Hang on! There’s more to this story, since the JDK actually contains a JRE itself…

Whaaat! There’s really a JRE inside the JDK? 🤔

Yes, there are quite a few similarities between the JDK and JRE, so let’s take a closer look.

When you download and install the Java Development Kit (JDK) not only do you have everything needed to compile Java applications, but also to run them too! Or in other words, the JDK contains the Java Runtime Environment (JRE).

If my name were Venn and not Tom, I’d illustrate the idea like this.

The JDK includes the JRE to make development as simple as possible. We can compile and run applications using one JDK installation, without any other downloads.

Let’s try compiling and running HelloWorld using only the JDK.

Why use the JRE?

If the JDK already includes the JRE, wouldn’t you always use the JDK to compile and run applications?

Yes, it’s perfectly valid to install a JDK onto a production server and use it to run Java applications. But there are some special use cases to consider.

To see for yourself, let’s compare the size of the JDK and JRE.

Using the diff command you can also check the differences between the JDK and JRE. From my investigation I see that the JDK contains 52 files that aren’t in the JRE! None of those are required for running Java applications.

Both the JDK and JRE are platform dependent. That means you can only use a version that’s been built for the specific type of machine you’re using.

The JDK is available for:

The cool thing about Java is that the bytecode generated by the JDK’s compiler can be run anywhere that a JRE is available. This is the write once, run anywhere ethos of Java.

For example, you can compile Java source code on a Windows machine and run it on Linux. No problem.

Java is maintained by Oracle, who offer their own approved JDK. But many other organisations offer JDK builds.

Here’s a summary of some of the most popular, specifically for the current long term support (LTS) Java 17.

Interestingly, even though Oracle used to offer a JRE for earlier Java releases, that’s no longer the case. How come?

Well, JDK 9 adds a new tool called jlink to go alongside the new Platform Module System. jlink lets you build your own minimal JRE with only the required libraries, saving on storage and offering improved performance over the pre-built JREs that came before.

Since it’s possible to build your own JRE, Oracle no longer saw a need to offer one. Other organisations like Amazon and Eclipse realised that some developers do still use pre-built JREs, so continue to offer it.

Which JDK? If you’re wondering which JDK build you should use, check out the nice summary over at whichjdk.com.

You now know the main differences between the Java Development Kit (JDK) and the Java Runtime Environment (JRE).

You also saw practically how to compile code with the JDK and run it with the JRE.

Have a question on this topic? I’m always looking for ways to improve this article, so leave a comment below and I’ll get back to you ASAP.

JDK vs. JRE: The Key Differences