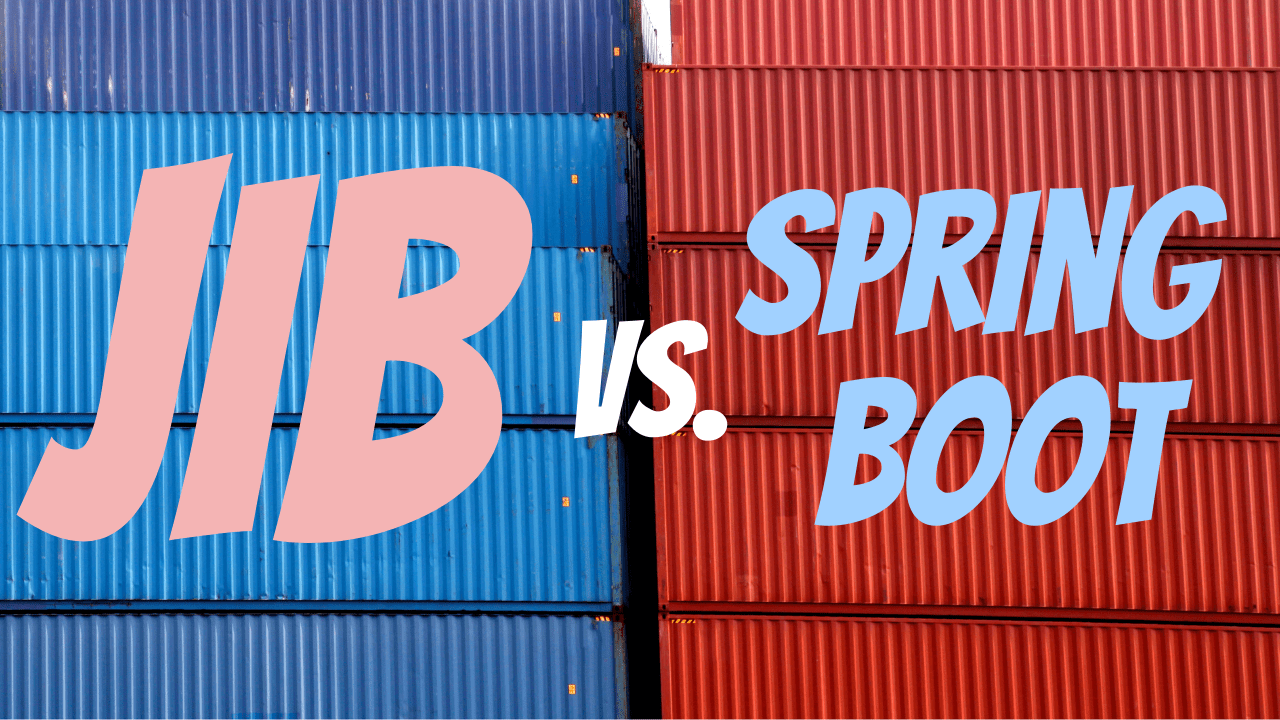 With so many new tools to help build Docker images, it’s confusing to know which to choose. And what’s wrong with just using building directly with Docker, without involving Jib or the Spring Boot plugin? In this article you’ll discover why using a Docker build tool is a good idea, which one is best for your situation, and how to set it up to build your Spring Boot application.

If you’ve ever written a Dockerfile for an application, you’ll know it can be tricky to get things running properly. You’ve got to pick the right base image, copy your application files from the build context, and remember how to use the CMD or ENTRYPOINT Docker instructions to startup your application.

And that doesn’t even consider:

There’s a lot to think about here! Even the most conscientious developer will have a hard time keeping up with it all. But there’s more.

Ideally your application’s Docker image will be generated in a continuous integration (CI) environment as opposed to on a developer’s laptop. This environment should be controlled and audited so you’ve got full visibility on what’s happening. That’s important for images that will eventually be deployed to production.

CI servers and Docker are sometimes incompatible. Remember that to build an image using Docker, whatever is issuing the commands needs access to the Docker Daemon.

When a CI server is itself running inside a Docker container, it may not have the required privileges to access the Docker Daemon. For example, if you run Jenkins inside AWS’s serverless Fargate service, there’s no access to the Docker daemon running on the host.

Obviously this poses a problem, but as you’ll learn shortly we have some viable workarounds.

Just like the taste of an aged whisky, Docker images consist of multiple layers. In fact, Dockerfile instructions like COPY add a new layer which is cached locally on your hard drive. This helps enormously with build performance, since when you change a line of your Dockerfile, only that and following layers need to be regenerated.

It uses the openjdk base image then simply copies a jar file from the Docker context on top of it. This is how the image built from the Dockerfile looks in terms of its layers.

You can also see the layers being created during the build process.

The next time the image is built, the output indicates that the previous cached layer has been used instead of copying the jar file again.

All this is designed to make building images as fast as possible. So what’s the problem then?

Well in the example above you can see that the jar file itself constitutes an entire layer. That’s fine for small jar files, but some applications produce jar files over 100MB in size!

This creates a couple of problems:

It would be better if the jar file contents itself consisted of multiple layers. That way, when one layer changed, not all the other layers would have to be rebuilt. Well, fortunately someone at Spring Boot HQ already through of that.

Since Spring Boot 2.3 the generated fat jar file includes details of the different layers. A layers.idx file is included, defining the layers and their associated files and directories.

So what? How does this jar file layering help?

Well, Spring also supports an option to extract a fat jar file based on its layers.

ℹ️ Fat jars are simply jar files containing all the application’s dependencies. That means they can be run standalone, as opposed to having to manually add all the dependent libraries to the Java classpath. The Gradle Spring Boot plugin automatically creates a fat jar when executing the bootJar task.

Given the above layers.idx we’d end up with 3 directories: dependencies, spring-boot-loader, and application (the snapshot dependencies layer in this case is empty).

These directories would be quite useful to extract and add to a Docker image, don’t you think? If that were done, we’d end up with multiple layers in our image, and changes to our application would result in streamlined image rebuilds.

Let’s jump into how Jib and Spring Boot can manage that for us.

Jib is a tool from Google, specifically designed to generate Docker images from a jar file. Importantly, it creates a layered Docker image for you, saving on both time and disk storage. Plugins are available to run Jib within the Gradle and Maven Java build tools.

Let’s look at an example using Gradle, by taking the infamous spring-boot-api-example project and getting it running inside a Docker image built by Jib.

Apply the Jib Gradle plugin in a project’s build.gradle file like so.

Given this configuration, we can execute the jibDockerBuild task, which builds the image using the local Docker daemon (more on why and how not to use Docker later).

We can see the image is available when we run the docker images command.

Awesome! Let’s go and ahead and run the image as a container to make sure it’s working.

This output shows the application has started up within the container. Cool!

ℹ️ Note the very old timestamps (51 years ago) in the Docker output above represent the Unix epoch. This is used for the container image creation timestamp to make Jib builds reproducible. In other words, it means that the same inputs will always generate the same image with the same image digest/hash.

One of Jib’s advantages is that it doesn’t require Docker to build Docker images.

How is that possible? Well, the clever folk at Google have replicated the Docker image build mechanism, consisting of generating the correct tarballs and configuration files.

The distinct advantage of not using Docker is that it becomes possible to build images in environments where it’s not possible to install Docker, such as continuous integration (CI) servers as mentioned earlier.

Jib let’s you build the image in 2 ways when not using Docker:

Since the 2nd option is most common in a CI environment, let’s explore how it works via the jib Gradle task, to push the image to AWS’s Elastic Container Registry (ECR).

First though, we need to add some configuration to setup the connection with the remote Docker registry.

Now we’re ready to run the Gradle jib task to build and push the image.

In my case, from the AWS console I can see that the image is now available. 👍

Jib doesn’t give much output during image build to prove the layering is working, but we can check it using the docker history command. First though, we need to docker pull the image so it’s available to our Docker daemon.

We can clearly see above we have classes and dependencies layers, highlighted above. However, this doesn’t respect what’s been defined in layers.idx, but instead Jib uses its own approach to layering. You can read more in the How are Jib applications layered? documentation.

The second approach to building Docker images uses the Spring Boot Gradle plugin. That’s the same plugin developers use to generate the fat jar using the bootJar task and run the application using the bootRun task.

The plugin uses a technology called Cloud Native Buildpacks (CNB), which is an abstraction on top of the Dockerfile providing a best-practice approach to building Docker images. From my testing the integration with this technology is seamless, automatically supplying the correct Java 17 JRE in the image based on my Gradle configuration.

Note that to use CNB though, we do need access to a local Docker Daemon, which might be problematic in some CI environments.

No additional configuration is required to build the image, as the plugin by default uses the project’s name and version for the image name. So we just need to run the bootBuildImage Gradle task.

Once again we can successfully run a container from that image.

The plugin can also push an image to your Docker registry of choice. Let’s set it up to publish to my private AWS ECR registry again.

With this in place we run the bootBuildImage task again, passing the --publishImage option.

Checking the AWS console verifies that the image has been successfully published. 👌

This time during the build process we get some helpful output in the console.

We can clearly see the layers defined within the layers.idx file. What’s more, we can see the effect of a change to our application.

For example, if I change one of the dependency versions in build.gradle, we get this output.

This reflects changes to the dependencies layer and the application layer (which got recompiled).

However, if I make a change to the application source code, we see this output.

Showing that only the application layer gets updated. Nice!

In many cases there’s no longer a need to maintain a Dockerfile alongside a Spring Boot application, thanks to the Jib and Spring Boot plugins. Which plugin you choose depends on your projects requirements, such as the availability of the Docker daemon within your CI environment.

To learn about another approach, check out Using Jenkins and Kaniko to build Docker images in AWS. Although for the purposes of building standard Spring Boot applications, I believe what’s been outlined in this article is more streamlined than using Kaniko.

6 thoughts on “Jib vs. Spring Boot for building Docker images”