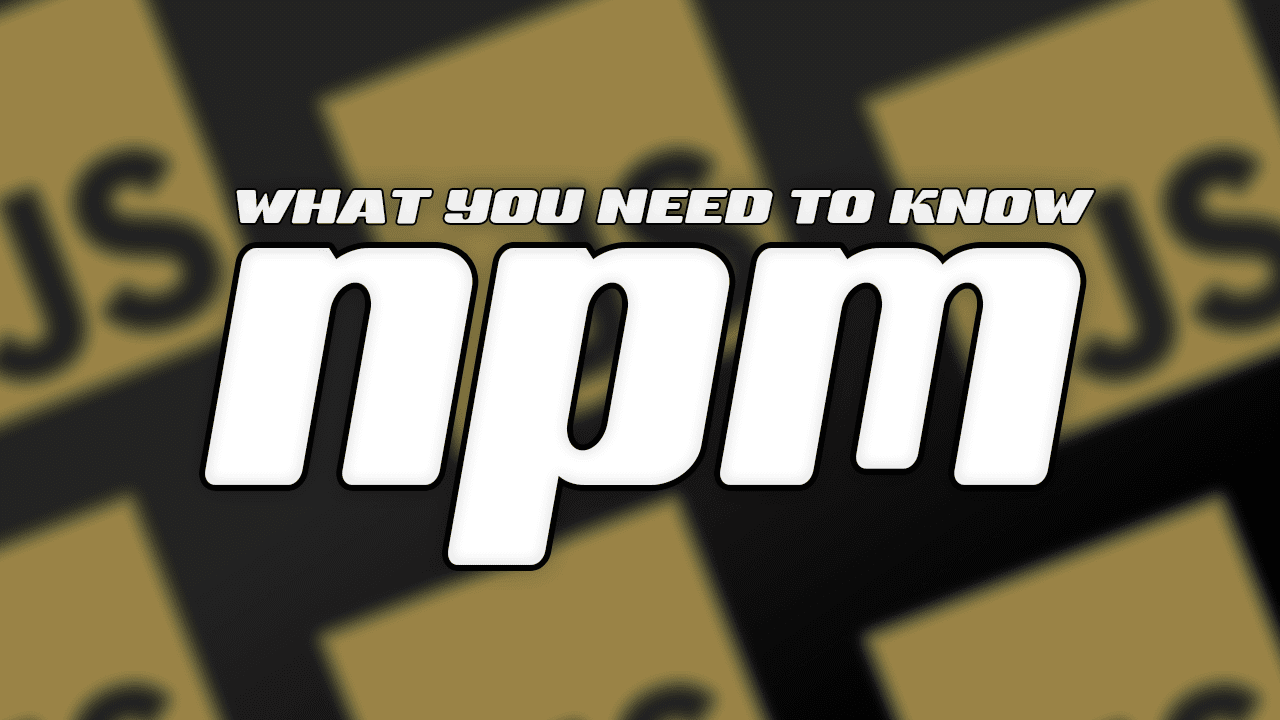 Not only is JavaScript the most popular programming language (65% of devs use it), it’s infiltrated all areas of technology. Dynamic web pages, backend services, and even desktop applications all run JavaScript now.

Since npm is the gateway into this amazing world, wouldn’t it make sense to know the basics?

In this article, you’ll learn the essentials of what npm is, how it works, and how to set it up in a Java developer-compatible way.

Contents
What is npm?
What is the Java equivalent of npm?
Why should Java developers care about npm?
How does npm work?
1) Installing npm
2) Initialising a project
3) Installing a package
4) Running JavaScript
5) Installing a global package
Can I use npm with Java?
How can I learn more about npm?

npm is the Node Package Manager.

Node.js contains an engine used to run JavaScript code. You’ve probably heard of Node.js being used on the server, to run backend services powered by JavaScript. But developers are using it for much more than that now.

To run JavaScript code with Node.js, just pass the filename to the command-line tool:

After Node.js’s release in 2010, a clever developer, Isaac Schlueter, realised the need for a way to share JavaScript code for reuse. So he invented npm.

npm is a command line tool which downloads packages required by JavaScript projects. There are over 1.3 million packages to choose from, hosted in a registry also called npm. These packages can be imported into a JavaScript file, enabling code reuse and rapid development.

For years, as Node grew, npm became a way people published JavaScript to a shared repository.

npm can do a lot more, but managing packages is at it’s core. Later, you’ll see practically how this works.

But first, let’s see if npm has an equivalent in the Java world.

What is the Java equivalent of npm?

Since npm is both a command line tool and a registry, Maven is an obvious equivalent, comprising both of these.

But a more up-to-date toolset would be:

Comparing Gradle to the npm command-line tool is of course an over-simplification.

The first constraint means that Gradle, unlike npm, has to compile code and handle complexities like Java versions and incremental compilation.

The second constraint means Gradle has to handle dependency version conflicts, and allow the developer to choose one over the other. In the JavaScript world, you can use multiple versions of the same package at the same time, even within the same JavaScript file.

With these differences in mind, both npm and Gradle are still the go-to tools which developers use to build, run, and test applications.

Why should Java developers care about npm?

If, like me, you’ve spent many of the recent years living in a Java bubble, you might be wondering what’s changed.

JavaScript is playing an increasing role in many areas of software, and npm is at the centre of that.

Even if you’re not developing JavaScript applications, more and more tools that backend developers might need to use are written in JavaScript and packaged with npm.

For example, recently I wanted to use the Serverless Framework to deploy some serverless functions and other resources to AWS. I used npm to install this as a global package, so I could easily deploy AWS infrastructure using the serverless deploy command. More on global packages in a moment.

If you feel like much of the recent software technology has flown right by, then getting familiar with npm could be the key to unlocking it. You might even have a chance of finally speaking the same language as frontend developers. 😮

Sound good? OK, well let’s get into how it actually works.

How does npm work?

We’ll explore how to use npm with 4 practical examples:

npm is a command-line tool you install using a version manager or a standalone installer.

It has handy commands for installing, viewing, and selecting different versions.

Node.js and npm are both installed together using these tools. That makes sense because npm runs on Node.js.

To create a new project, run npm init. It asks for the details like package name, version, and description, then generates the important package.json file.

Don’t worry about the details of this file for now. What’s important is to know that it describes your project and its dependencies, and should be committed into version control.

Project vs. package: technically, in npm everything is a package. A project makes sense to Java developers though, and I’ve seen many JavaScript developers use it too.

Installing packages is what we do to add a dependency to a project. It’s like when you add a Java library’s group, name, and version to a pom.xml or build.gradle file.

Rather than editing package.json though, you do that using npm directly. It fetches the latest package version from the npm registry.

Imagine we want to use the JavaScript package chalk, which changes the color of text written to the JavaScript console. Add the package with npm install <package-name>.

Running this command made 3 changes to our project:

A node_modules directory was added, where npm stores downloaded packages, ready for JavaScript code to reference them.

Ours has a single entry for chalk:

Chalk also has it’s own package.json. It doesn’t have any dependencies, but if it did they’d be listed here and npm would download them too.

Importantly, node_modules isn’t committed to version control. It should always be dynamically generated based on the package.json file.

package.json now has a dependencies section, with the latest version of chalk included:

Imagine we commit the project directory to version control (excluding node_modules) and someone else checks it out. All they need to do to add the correct packages to node_modules is to run npm install (without a package name).

Finally, the package-lock.json file describes the current state of your node_modules directory.

Did you notice the caret ^ character before the chalk version in package.json? That means that when you run npm install it installs the latest minor update. That could be different from the version number specified e.g. 5.3.0 is a more recent minor version than 5.2.0.

That means one developer’s machine could have a different package version in node_modules to another, based on when they ran npm install.

package-lock.json fixes this problem. You commit the file to version control, and npm honours the entries contained within it whenever you run npm install.

With our chalk package installed, it’s time to do something with it.

We’ll add an index.js file with this JavaScript code:

We have to add one entry to package.json,  "type": "module", to use the right module system for chalk (ES Modules).

Now run index.js by passing it to the node command.

Awesome! So we successfully installed an npm package and used it in some JavaScript code.

To keep everything within npm, a lot of developers add an entry in package.json under scripts. Here we specify any scripts we want to run via the npm command line.

Now we can run the script with npm run start:

We’ve covered in detail how packages work within a specific software project, but npm also has global packages.

Typically, these are standalone tools that provide some utility without being referenced by JavaScript code.

Conveniently, npm also makes a command available to run the package directly, without prefixing it with npm. To see this in action, we’ll install http-server, which serves the filesystem on a local web server.

From any directory, we can now run http-server to serve its contents on localhost:8080.

See the power of that?

What’s more, since npm 5.2 , we don’t even have to install a package globally. Just run npx <package-name> to execute it directly.

Can I use npm with Java?

Add npm into your build process with the Gradle Plugin for Node.

It’s a plugin you apply in your project’s build.gradle build script like this:

Now you can run the npmInstall task. The plugin automatically downloads npm and runs it against a local package.json file.

The resulting node_modules directory can then be incorporated into your application as required.

What’s neat is that this plugin uses Gradle’s incremental build feature, so it only runs npm install when package.json has actually changed. Nice!

How can I learn more about npm?

You now know more about npm than 95% of Java developers, and probably most JavaScript developers too. Good work!

To deepen your understanding, I recommend that you:

If you’re a Java developer whose started using npm, I’d love to hear if you’ve managed to wrap your head around it. Just leave a comment below or email me directly.

What Java Developers Need To Know About NPM