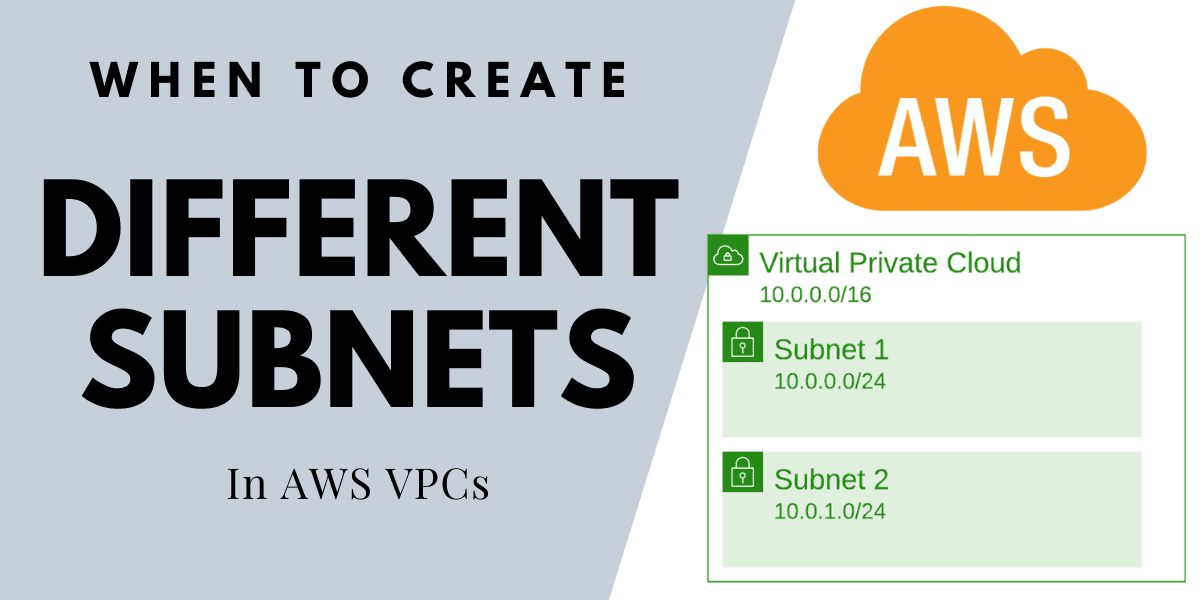 Configuring subnets and VPCs can be confusing when you’re setting up AWS infrastructure. There’s plenty of documentation about what subnets are, and how to create them, but not necessarily when and why you’d create them. In this article you’ll learn why you’d want to create multiple subnets in the first place.

First off though, here’s a quick recap of all the network related infrastructure that lives in a VPC. If you’re familiar with this, just skip to the main section of the article.

A subnet, or sub-network, is the result of splitting up an IP network by IP address.

This allows up to ‭4,294,967,296‬ different addresses, at least with IPv4, which is what we’re concentrating on in this article. Since an IP address consists of 32 bits, you can also think of this as 2^32, which represents the same number.

Typically though, rather than talking about networking identifiers or prefixes, we talk in terms of Classless Inter-Domain Routing (CIDR) blocks, or just CIDRs. This is just a way to express a range of IP addresses with a common prefix.

It consists of the first address in a network, followed by a slash, then the number of bits that make up the prefix. For example:

Here are some more examples:

Why use CIDR blocks?

The CIDR block notation starts making more sense when we talk about subnets. After all, as mentioned earlier, a subnet consists of a range of IPs with a common network prefix.

Note that in a private network, the RFC 1918 standard allows us to use IP ranges from the following three CIDR blocks:

Networks and subnets in AWS

In AWS a Virtual Private Cloud (VPC) is a cloud network into which you can deploy resources, where your have complete control over the network environment.

The subnet must use a CIDR block that falls within that of the VPC it’s assigned to. Once again you can use a block size from /16 to /28.

The subnet can span the entire IP range of the VPC, as below:

Alternatively, we could split the range of IP addresses in the VPC into multiple subnets, as below:

In the above scenario we’re not using the full IP range of the VPC, allowing ourselves the space to create more subnets in future (e.g. for 10.0.2.0/24). ✅

What situations warrant a different subnet?

Now that you have a good understanding of the fundamentals of networking, IP addresses, CIDR blocks, and VPCs, let’s dig into the scenarios in which you might want to consider using separate subnets in your AWS VPC.

In AWS, though, a subnet can only span one availability zone. This means that to achieve high availability you must deploy services to multiple subnets.

Consider the example below, where we have a VPC in eu-west-1. In order to deploy services into multiple availability zones we can create two subnets, one in eu-west-1a and the other in eu-west-1b.

2. Securing your AWS resources within a private subnet

A private subnet is a subnet that doesn’t have a route to the internet, whereas a public subnet does. This can be useful to provide an additional layer of security for services that don’t need public access, such as databases or backend microservices.

To provide internet access to a subnet we need an AWS Internet Gateway. A subnet can then be attached to a route table which contains a route to that internet gateway. That subnet then becomes a public subnet.

If, on the other hand, another subnet is attached to a route table that doesn’t contain a route via the internet gateway, it’s a private subnet.

This setup is shown in the diagram below:

Note that we have:

If you want to use the Application Load Balancer, which is a layer 7 HTTP load balancer, you’ll need to configure at least two subnets. Or more specifically, you need to specify subnets from at least two availability zones.

AWS don’t provide any clear reason why this is, and the Network Load Balancer doesn’t have such a constraint. It’s probably a good thing though, as it forces us to consider high availability of whatever services are being exposed by the load balancer.

AWS
AWS provide some excellent documentation, and I would recommend in particular:

VIDEO
If you prefer to learn in video format, check out this accompanying video to this post coming soon on the Tom Gregory Tech YouTube channel.

When to create different subnets in AWS VPCs

One thought on “When to create different subnets in AWS VPCs”