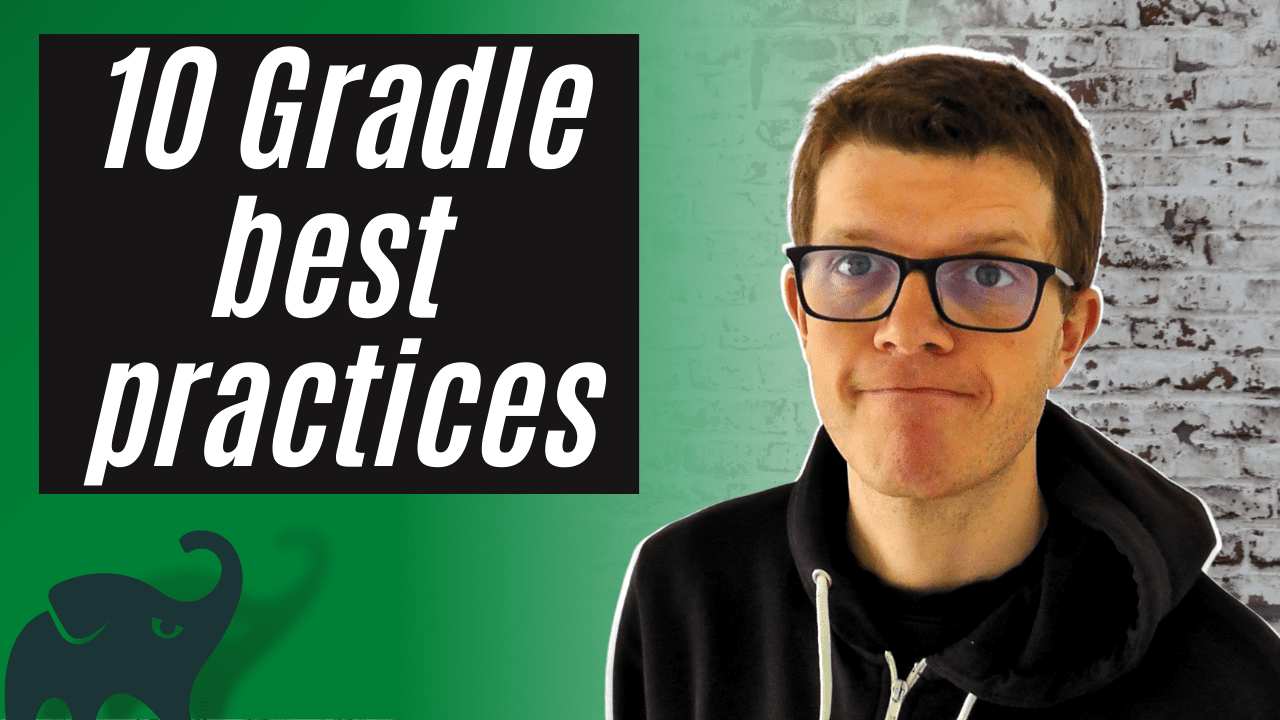 When you use a build tool like Gradle, there are often many ways to do the same thing. How can you decide? Experience counts for a lot, but for something more practical I’ve compiled this list of 10 essential Gradle best practices. If you incorporate these into your project, you’ll have a good chance of success.

1. Always use the Gradle wrapper

The wrapper is a special script included in your project which handles downloading the correct Gradle version and executing a build.

This sounds simple, but it has 3 big advantages.

If you don’t currently have the wrapper in your project, you can add it by running gradle wrapper.

Keep the Gradle elephant happy and always use the wrapper!

If there’s one way to guarantee you’ll waste tonnes of time, it’s to run a clean every time you do a build. 🧹

Here’s how it normally looks:

And is sometimes accompanied by general complaints about how slow the build is.

Gradle has an awesome feature called incremental build which means if you change something in your project and run a build, it only runs the necessary tasks based on that change. For example, if you modify a test class, Gradle doesn’t need to recompile your production code. Incremental build means small changes normally result in a very fast build, helping developers get more work done.

When you run clean there’s no way that Gradle can use the incremental build feature, and the Gradle elephant becomes very sad.

Another scenario where sometimes people think clean is required is if files are deleted. Here’s how one popular post from StackOverflow put it.

“Similar side effects can happen also with resources/classes removed from the sources but remained in the build folder that was not cleaned.”

An incorrect assumption about Gradle from StackOverflow

Of course, the desired outcome if a file is deleted is that the corresponding compiled class or copied resource created in the build directory should also be removed.

Save yourself some time and stop cleaning your project!

Partner in crime with build.gradle, the settings.gradle file is usually found in the root of a project.

It specifies, amongst other things, the project name and any subprojects to be added to your build.

If at this point you’re wondering what is this mysterious file, this tip is for you!

If not, did you know that settings.gradle is optional?

Yes, you can omit the file, in which case Gradle uses a project name based on the directory name. That’s not very helpful, because if your project is ever cloned to a differently named directory, its name will be incorrect. This could happen on a CI server, for example.

There are also performance implications. If you leave out settings.gradle, Gradle recursively navigates up the directory tree looking for such a file. That could be a lot of unnecessary file reads.

Save yourself from future pain and always include a settings.gradle file!

If you’re anything like me, when there’s a lot of clutter in build.gradle things are really difficult to understand. That’s why Team Gradle invented the buildSrc directory.

The buildSrc directory lives in the root of your project, and can contain Groovy, Kotlin, or Java source code. If you have any task code in your build.gradle, it’s ripe for moving over to buildSrc for 3 main reasons:

Here’s an example of an unnecessarily verbose build.gradle.

As the build.gradle grows, this kind of code can send your head in a spin. Let’s create the buildSrc directory at the same level as build.gradle, with the following structure beneath it.

We can almost lift-and-shift the class definition from build.gradle into RollercoasterTask.groovy. We just have to include the relevant package and import statements.

In build.gradle we can replace the class definition with a single import statement. Much nicer!

Give you and your colleagues some peace of mind by moving task class definitions to the buildSrc directory!

There’s nothing that kills productivity like a slow suite of unit tests. Why not make the most of your available CPU cores, and run tests in parallel?

It’s easy to get tests running in parallel, with this small addition to build.gradle.

With this in place, Gradle will allocate each of your test classes to one of up to three test executors.

Let’s do one of those impactful before-and-after examples, using this sample Java project with 3 test classes.

When running using a single thread the tests take 11s to execute.

With the maxParallelForks configuration applied, our tests go into turbo mode and execute in only 5 seconds! 🚀

Of course, the improvements you get will depend on your specific project and the machine you’re running the tests on. Gradle won’t run more executors than there are CPU cores available.

To avoid any strange side-effects, you should make sure that your tests don’t have any interdependencies before running them in parallel.

Share the load and run your tests in parallel!

Versioning your Gradle project makes it easier to understand when changes have been introduced. This is especially important when others are consuming your project, as is the case when you’re creating a library or tool.

For example, Gradle itself uses a fairly standard version number system which includes a major, minor, and patch version.

The benefit of this is that Gradle users, such as you and I, can easily understand the scope of changes when upgrading Gradle. When the major version increases, this indicates that there may be breaking changes and we should read the release notes.

In Gradle, setting a version number is done in the build.gradle like this.

One approach to versioning would be that whenever you do a release you manually change this version number appropriately. There’s a better way though, which doesn’t involve having to edit and commit build.gradle.

Most projects on GitHub use tags for the version number. Here’s the tag for the latest release of Gradle, at the time of writing.

To implement something similar in your own project, you could use the axion-release plugin. Once applied to your project, it makes releasing easy through several new tasks.

Run the currentVersion task to see what version your project has. If you don’t currently have any tags, it defaults to 0.1.0-SNAPSHOT.

Run the release task to tag your repository.

If you make any further commits to your project the version will automatically become 0.1.1-SNAPSHOT. You can configure the plugin to increment the major, minor, or patch version as you prefer.

Let others know about the cool stuff you’re releasing by versioning your project!

7. Encapsulate task declarations in a plugin

A task declaration is when we create an instance of some task class, normally configuring some task properties.

Here’s an example of a declaration of the Copy task in build.gradle, creating a task called copyQuote.

The fact that this task is declared in build.gradle can cause several issues:

The solution is to move the logic into a plugin. When applied in build.gradle, plugins normally add helpful tasks to your build.

If you only need to use the plugin from within your project (not other projects), you can define it in the buildSrc directory.

Here’s an example of moving the copyQuote task above into the plugin class.

With Gradle plugins, an extension is a way to configure your plugin from within build.gradle. In this case we’re providing a way to configure the token replacement value during the copy, with the wonderland extension, which uses WonderlandPluginExtension.groovy.

Now the build.gradle can be greatly simplified.

Feel free to try out the full sample project on GitHub.

8. Use the latest Gradle version

The clever folks over at Gradle HQ are always adding new features and improvements, so why not take advantage of all that good stuff?

You can check Gradle releases for the latest version. Since we’re all using the Gradle wrapper now 😉 (see tip #1), update your project with ./gradlew wrapper --gradle-version <version>.

This command changes the Gradle version in the gradle/wrapper/gradle-wrapper.properties file. Next time you run a build, the version you specified will be downloaded from the internet and cached locally.

Don’t forget to commit any changes to your Gradle wrapper files back into version control, so everyone’s using the same version of Gradle.

To see what cool stuff is in the Gradle 7 major release, check out Top Gradle 7 features & improvements.

Get maximum Gradle goodness by using the latest version!

Declaring repositories in build.gradle tells Gradle where it should looks for dependencies required to build your application.

For example, here we tell Gradle to look in my custom local Maven repository and Maven Central.

Let’s assume the same project requires these dependencies to build the Java application.

The first dependency comes from my local Maven repository, but the others are found in Maven Central.

Let’s try building the application with --refresh-dependencies, forcing Gradle to go back to the repository to check for changes. We’ll also pass --info to see details of what’s happening.

The output shows that there are in fact 36 Resource missing errors, where Gradle looked for a dependency but couldn’t find it. Can you guess why?

The simple fix is to reverse the order of the repositories.

Now the same build command only gives us 2 missing resources. On a small project this might not make much difference, but on larger projects that may rely on hundreds of dependencies the difference could be more significant.

Avoid unnecessary network requests by optimising the order of your repositories!

Did you ever commit a password into version control and receive the full wrath of the once friendly security adviser? 😠 I hope not, as it can be a thoroughly unpleasant experience.

That’s a thing of the past though, since Gradle offers many ways we can move credentials outside of a project.

A common use case is to pull dependencies from a private repository, which requires a username and password.

You could pass these on the command line or set them in ~/.gradle/gradle.properties, which for the above example would look like this.

Once again, pass the password on the command line or in ~/.gradle/gradle.properties.

Keep your passwords secret by externalising your credentials!

If you found these best practices useful, then why not check out other tips over on the Gradle best practice tips YouTube playlist?

2 thoughts on “10 Gradle best practices to supercharge your project”