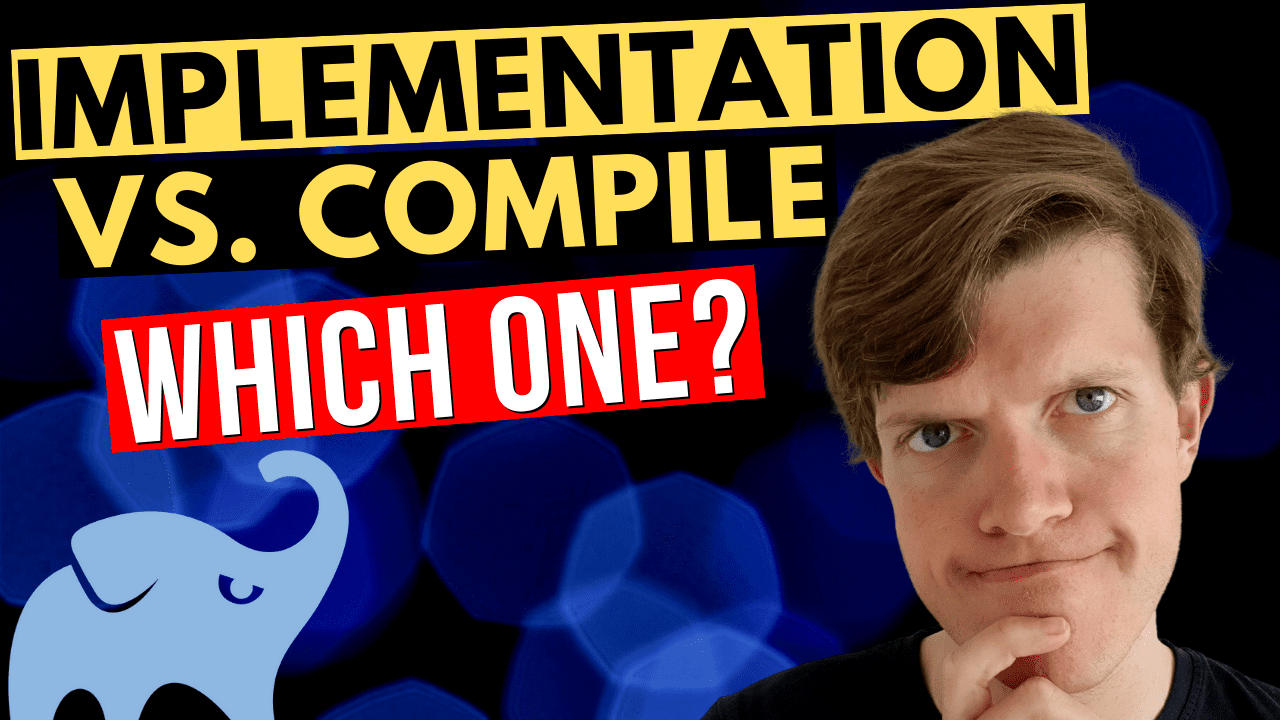 Gradle version 6 supports both the implementation and compile dependency configurations. Why are they both there and which one should you use? Let’s find out with the two simple rules described in this article.

Quick answer: use the implementation configuration and never compile, BUT read on for some important caveats

When declaring Java dependencies in Gradle you provide a dependency configuration to which to assign your dependency. e.g.

However, the docs for the Java plugin say:

Rule One
You should always use implementation rather than compile for dependencies, as compile is now deprecated or removed in the case of Gradle 7+.

If you try to use compile in your Gradle 6 project you’ll get a warning like this:

Deprecated Gradle features were used in this build, making it incompatible with Gradle 7.0.
Use ‘–warning-mode all’ to show the individual deprecation warnings.

If you run with --warning-mode all enabled you’ll get a more detailed explanation:

The compile configuration has been deprecated for dependency declaration. This will fail with an error in Gradle 7.0. Please use the implementation configuration instead.

So if you want to continue using the latest version of Gradle, I suggest swapping out compile for implementation as soon as possible. 🏃

What is an implementation dependency?

Forget Gradle for a moment. When you’re building and running a Java project there are two classpaths involved:

Rule Two
Use the implementation dependency configuration if you need the dependency to be on both the compile and runtime classpaths. If not, consider compileOnly or runtimeOnly.

Why would you care so much about a dependency being only on a specific classpath? Well, a few benefits include:

In Gradle you can inspect your classpaths using this task ./gradlew dependencies --configuration <compileClasspath | runtimeClasspath>, substituting in the configuration you want to see.

It’s worth noting that it’s a very similar story for test dependencies, with the Gradle Java plugin providing the testRuntimeOnly, testImplementation, and testCompileOnly dependency configurations. What dependencies you add to these configurations determines how your test compile and runtime classpaths will be created.

For a full understanding of dependency configurations I highly recommend the Gradle Hero course, which also explains how they relate to tasks in your project.

If you’re writing a library that another Gradle project is going to consume, then you’ll probably want to use the Java Library Plugin. This plugin adds an additional api configuration, on top of the already mentioned implementation configuration.

For any Gradle projects consuming a project built using the Java Library Plugin, the following applies:

If this sounds a bit cryptic, you can check out all the details in the article How to use Gradle api vs. implementation dependencies with the Java Library plugin.

There’s just one main point to remember when it comes to figuring out whether to use implementation vs. compile dependencies.

Rule 1: you should always use implementation rather than compile for dependencies, as compile is now deprecated or removed in Gradle 7+.

Rule two: use the implementation dependency configuration if you need the dependency to be on both the compile and runtime classpaths. If not, consider compileOnly or runtimeOnly.

Hopefully this makes sense now. Be sure to check out the Gradle Java Plugin documentation on this subject.