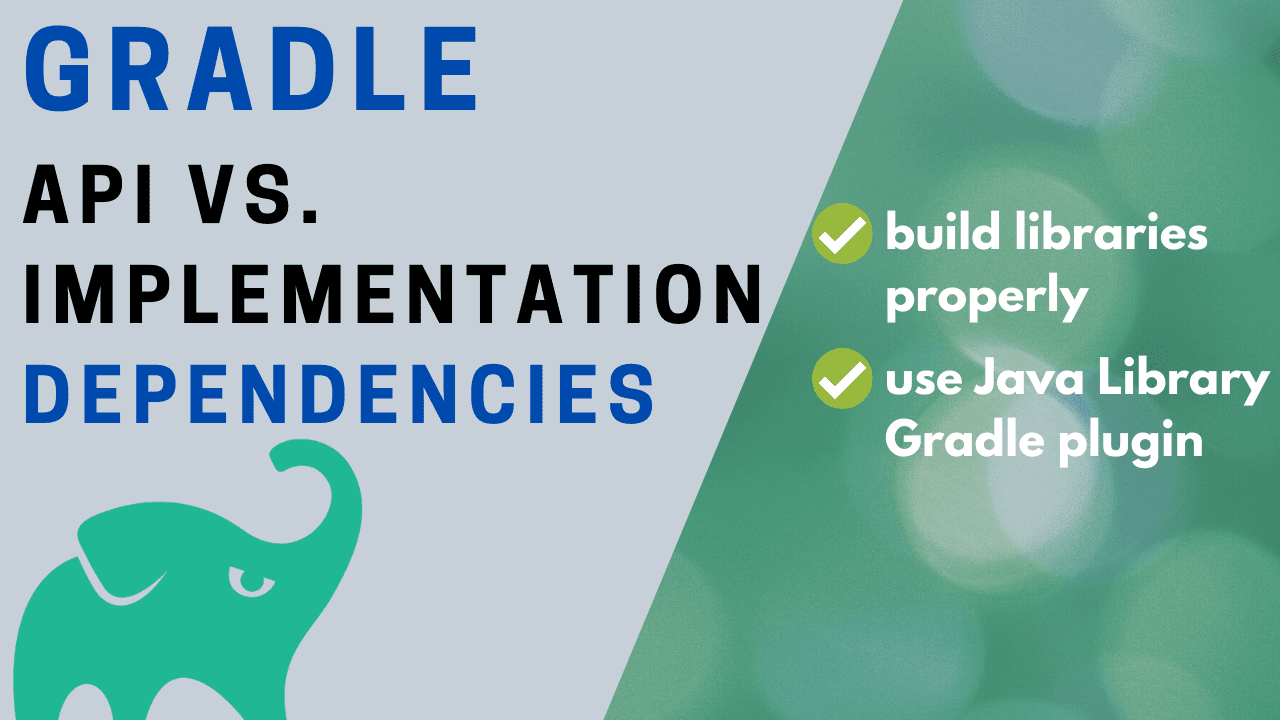 In this article you’ll learn the main differences between Gradle api and implementation configurations with a real-world example showing exactly how things work under the covers.

The Java Library Plugin is the recommended plugin to use when building libraries to be consumed by another project. It distinguishes between api and implementation dependencies, offering some key benefits for whoever consumes the library.

UPDATED in July 2021 to use the latest Gradle version.

In Gradle a configuration represents a group of artifacts that you want to use in some way in your build. A dependency, on the other hand, is a reference to a single artifact that is grouped in a configuration.

For example, here we have a dependency on jackson-databind within the implementation configuration. This configuration will get used to generate both compile and runtime classpaths, which you can query using ./gradlew dependencies.

Info: in Gradle 7+ the compile configuration was removed, and should be replaced with implementation

And the runtime classpath:

These classpaths include not only the artifact we depended on but also its transitive dependencies.

In this case the classpaths are exactly the same. This is because the jackson-databind artifact has declared its own dependencies as compile scope dependencies, which you can see in the Maven Central repository:

And according to the Maven docs, anything in the compile scope is also included in the runtime scope

Compile dependencies are available in all classpaths of a project.

But what if we wanted to have more fine-grained control over the compile and runtime classpaths?

Wouldn’t it be nice if only artifacts that really need to be on the compile classpath are added to it, and all the others go on the runtime classpath?

Can Gradle provide a way to do this? 😉

So let’s imagine a scenario where you have an Application that depends on Library A which has two transitive dependencies, Library B & Library C:

Types that don’t fall into the ABI include:

The important thing to remember about the ABI is that any types used within it need to be declared on the compile classpath. With this information then, we can think about how we’d build up the compile and runtime classpaths for Application:

If we had the ability to build up these classpaths selectively like this then, we’d benefit from the following:

The Java Library Gradle plugin makes this fine-grained classpath control possible. It’s up to you as the creator of a library to define which dependencies should be included in the runtime or compile classpaths of whatever application is consuming this library.

We achieve this with the following dependency configurations:

Going back to our example from before then, if we were writing Library A our dependencies in our build.gradle would look something like this:

This enables the Java Library plugin to generate the artifact with the relevant information so that the consumer can construct the classpath correctly.

Enough of this Library A-Library B stuff then! Let’s get into a real life example and see what’s going on under the hood.

Our library has just one class, AwesomeService, which we’ll put in a package com.tomgregory:

This class exposes a method that hits a REST API and returns the result. Note that:

Publishing our library to Maven local

Let’s now run ./gradlew publishToMavenLocal and see what we end up with:

Navigating to my ~/.m2/repository/com/tomgregory directory I can see we’ve now got a gradle-java-library-plugin-library directory. Within that we have another directory for our 0.0.1-SNAPSHOT version:

Let’s then take a look inside the pom file, which any consumers of this library can use to determine transitive dependencies:

Info: the .pom file is an xml file containing metadata about the artifact, popularised by the Maven build tool. This metadata format is still used, even when using different build tools such as Gradle.

You can see here that:

Awesome Gradle, you got it right! ✅ Therefore any consumers of this artifact should honour the scopes of these transitive dependencies.

The last step here is to consume this library within a Gradle built application and ensure the classpaths are setup according to the scopes defined in the library’s pom file. We’ll create a project called gradle-java-library-plugin-consumer.

The build.gradle file for the consumer should look like this:

And just for fun lets add a Java class DoStuff to the com.tomgregory package, to make sure this all works:

Here we’re instantiating the service provided by our library and calling getWebPage. We’re also calling the get method of JsonNode, provided by the jackson-databind artifact available on the compile classpath. This method drills down into the returned JSON object to get the value of the status field.

Everything seems to be working in our application as expected, but if you’re anything like me you’ll want to see under the covers to verify this. Fortunately Gradle provides the dependencies task which shows us both the compile and runtime classpaths.

To get the compile classpath run ./gradlew dependencies --configuration compileClasspath

And for the runtime classpath run ./gradlew dependencies --configuration runtimeClasspath

We can see here that the compile classpath as expected has our library and jackson-databind only. The runtime classpath, on the other hand, has google-http-client and all of its transitive dependencies.

If you’re still with me at this point, hopefully you can see the power of using api and implementation dependencies in your libraries.

It might not make that much difference for a small project, but once you start creating multiple libraries consumed by multiple applications, you’ll benefit from following the best practice described above.

GITHUB REPOSITORIES
Grab the library code
Get the consumer code

How to use Gradle api vs. implementation dependencies with the Java Library plugin

15 thoughts on “How to use Gradle api vs. implementation dependencies with the Java Library plugin”