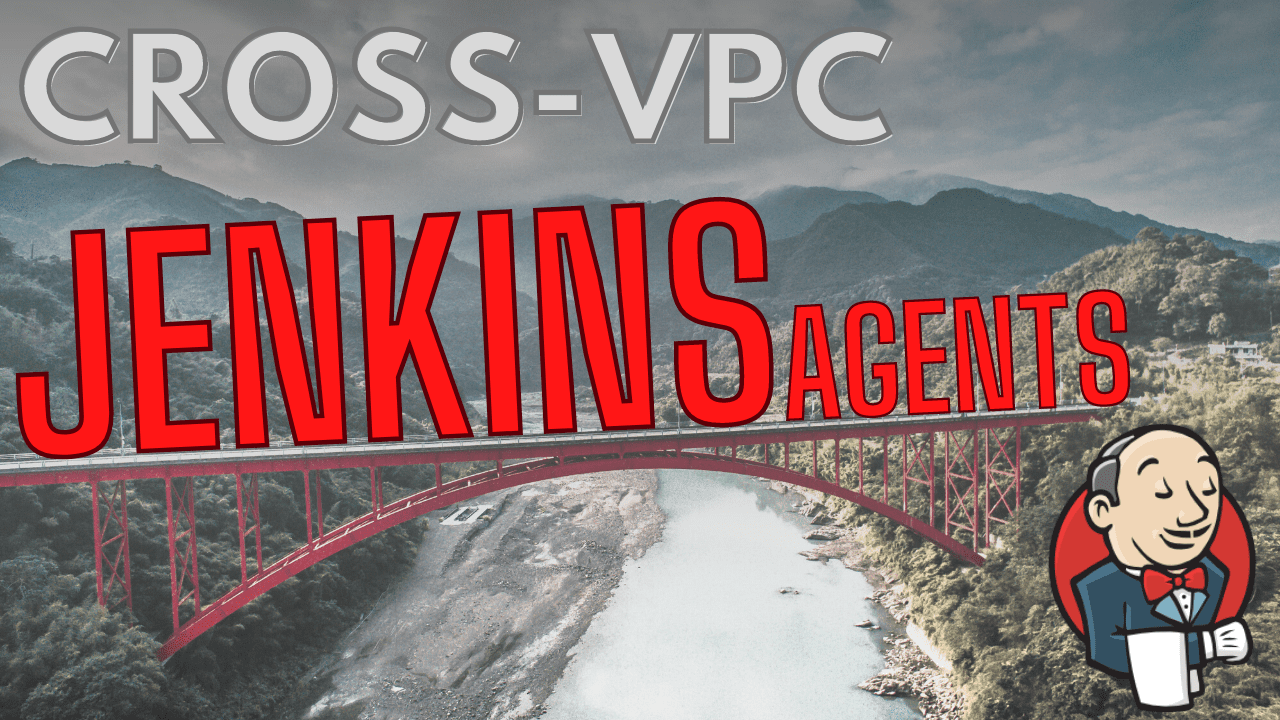 A Jenkins agent/slave must be able to communicate back to its master, which is simple to setup when everything’s in the same AWS VPC. But how will it work if we deploy the agent to a different VPC? In this article you’ll discover how to use VPC endpoints to enable a Jenkins agent in one VPC to communicate with a Jenkins master in another.

Running Jenkins agents in AWS helps us to horizontally scale Jenkins, since we can run each job in a short-lived container. These normally run in one of the AWS container services, ECS or EKS.

As a quick reminder, the Jenkins master/agent orchestration consists of two main parts:

The communication back from the Jenkins agent to the master is the focus of this article. When you deploy an agent in the same VPC as the master, the communication is straightforward since both are deployed into the same private network. In this case a private IP or private DNS name for the Jenkins master can be configured in the Jenkins Cloud Configuration settings page.

When you deploy an agent into a different VPC to the master, things get more interesting. The agent can’t access the master using a private IP or private DNS name as the master is deployed into a separate private network. There are several ways to open up these communication channels, including:

Before we get onto the details of my preferred choice, the VPC endpoint, let’s answer an important question.

Why would you want to deploy Jenkins agents into a separate VPC in the first place?

Well, here are some reasons.

Let’s assume you already have 2 VPCs with a Jenkins master deployed in one. From a AWS resource perspective, to achieve the above architecture we’d need to add:

Before getting into an example using CloudFormation, let’s consider the advantages of the VPC endpoint approach over the other suggestions made earlier:

To try this out yourself, this one-click CloudFormation deployment will deploy a Jenkins master into your own AWS account, using AWS ECS. Two VPCs are created, one for the master and one for the agents. It’s all configured automatically with a job which will run on a Jenkins agent in the other VPC.

When you click the link, you’ll need to provide values for:

Select Create stack and wait for the CloudFormation stack to reach a CREATE_COMPLETE state.

Let’s run through the individual resources created by the template. I’ll be specifically highlighting resources which have been added on top of my standard Jenkins deployment, the details of which you can find in this article.

For simplicity, I’ve defined the Jenkins JNLP port as a parameter to be referenced elsewhere in the template.

As well as the VPC for the Jenkins master, an additional VPC is added into which agents will be deployed.

This target group is where the Jenkins master ECS service will register its ECS task, using JNLP port 50000.

We create an internal NLB, for use later by the VPC endpoint service. The listener forwards any traffic that comes in on the JNLP port to the target group.

The LoadBalancers configuration of the Jenkins master ECS service needs to be updated to include a registration into the new NLB target group, for access to the JNLP port.

This is how the VPC endpoint service looks in the AWS console. The highlighted Service name is needed when creating a VPC endpoint.

Here’s how the VPC endpoint details look in the AWS console. On the right are the DNS names which can be used to access the endpoint.

This setup uses a custom Jenkins Docker image I’ve created which auto-configures Jenkins ready to deploy agents into ECS. To understand the full details, check out the jenkins-ecs-agents GitHub repository.

Below are some environment variables, set in the ECS task definition, which the above mentioned Docker image picks up.

Trying out the Jenkins job

If you’ve followed the above steps, you should now have a Jenkins instance running.

You can grab the load balancer DNS name by going to the EC2 dashboard, select Load Balancers, select the application load balancer (the one without nlb in the name), then copy the DNS name. Access Jenkins master by prefixing this name with https in a browser (or use your own domain if you’ve set that up).

To login, use the username developer with the password defined in a secret called JenkinsPasswordSecret, created automatically in Secrets Manager. When you login you should see a single job ready to run.

Run the job, then head over to the ECS dashboard, where you’ll see the Jenkins agent being provisioned.

If you view the task details, you can see the Subnet Id which you can verify belongs to the Jenkins agent VPC (i.e. the VPC with name containing JenkinsAgentVPCStack). Importantly, that means the agent is running in a different VPC to the master.

Eventually the Jenkins job should complete successfully, with a highly amusing log output.

Awesome! So we’ve successfully run a Jenkins agent in a separate VPC to the master, communicating through a VPC endpoint. ✅

To learn more about what was discussed in this article, check out these articles: