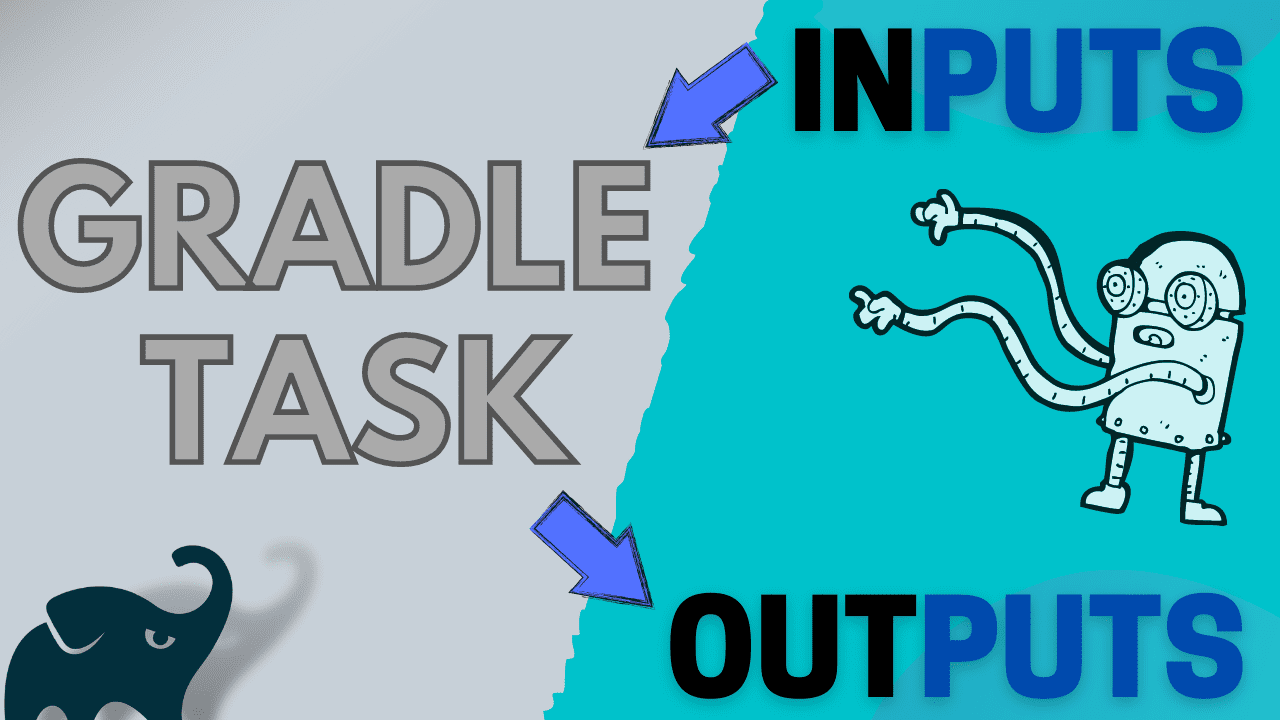 Declaring Gradle task inputs and outputs is essential for your build to work properly. By telling Gradle what files or properties your task consumes and produces, the incremental build feature kicks in, improving the performance of your build. You’ll also be following best practices, allowing you to easily create more complex projects.

In this article, you’ll learn how Gradle task inputs and outputs work, why they’re important, as well as practically how to implement them in your own projects.

A task represents a unit of work to get done in your Gradle project. That could be compiling code, copying files, publishing an artifact, or whatever action it is your task needs to accomplish.

We run tasks on the command line. For example, running ./gradlew compileJava will take your project’s .java files and compile them into .class files.

For you task to actually do anything useful, it needs some stuff to work on. This is called the task inputs.

Your task normally produces something. This is called the task outputs.

It’s actually quite straightforward. The inputs of compileJava are the source .java files and the Java version, and the outputs are the compiled .class files.

The relationship between task inputs and outputs is normally that a change in the inputs creates a change in the outputs. In the case of compileJava, if we change the .java files, it makes sense that the compiled .class files would also change.

The importance of task inputs and outputs

So you know what task inputs and outputs are now, but so what? Well it turns out that they play a crucial role in at least 3 key areas of Gradle functionality.

Gradle’s incremental build feature helps your build avoid doing the same work more than once. For example, does Gradle really need to recompile your code if nothing’s changed?

If all inputs and all outputs of a task have the same fingerprint as the last execution, the task can be skipped. Or in Gradle terminology the task is marked as UP-TO-DATE.

Let’s take any Java Gradle project as an example. If we run the compileJava task on a clean project (without a build directory), we get this output.

If we run the same task again, the output is this.

You can clearly see that the compileJava task is marked as UP-TO-DATE, meaning Gradle skips running it completely. It knows that neither the inputs nor the outputs have changed.

For this small project, it makes a tiny 1s difference in performance. For a large project, this incremental build feature can be a game-changer, saving developers a lot of time.

To get up-to-date info of tasks in the console output as above, set the --console option to verbose. You can do this by adding org.gradle.console=verbose to ~/.gradle/gradle.properties or passing --console=verbose on the command line.

Another important use is to link the output of one task to the input of another. One way to think about this is using the producer/consumer analogy. A producer task creates some output that’s used as an input to a consumer task.

Outputs can only be files or directories. This effectively makes the input of the consumer task the same file, directory, or file collection as the producer task.

This has some important benefits:

Imagine we have a Gradle project which does some very simple string manipulation on movie quotes. 🎬

There are two tasks

Linking the output of addQuoationMarks to the input of addQuoteSource is as simple as this.

You can see the full example build.gradle is this GitHub repository.

In Gradle a dependency configuration (or just configuration) is a way of grouping together dependencies to define their scope. For example, the java plugin adds the implementation configuration which is used to generate the compile and runtime classpaths.

One way configurations can be used is as a producer e.g. I want to add an artifact built by this project to the implementation configuration of any consuming projects.

This time we’ll have two subprojects:

In produce-quote we can create a custom configuration called quote. We can then add the output text file of the addQuotationMarks task to this configuration very simply.

This means that if the consume-quote subproject needs to consume the output file quote-with-quotation-marks.txt it could do that like this.

This is in fact Gradle’s recommended way for sharing inputs and outputs across subprojects.

Assuming the consuming task addQuoteSource has an input inputsFiles of type ConfigurableFileCollection, you can wire in the artifact dependency like this.

To see the full example, including how to get the expected file from the ConfigurableFileCollection, check out the GitHub repository.

How to declare task inputs and outputs

Before moving onto full implementation details, let’s quickly explore the full options for what types can be declared as inputs and outputs.

Gradle has the concept of lazy configuration, which allows task inputs and outputs to be referenced before they are actually set. This is done via a Property class type.

One advantages of this mechanism is that you can link the output file of one task to the input file of another, all before the filename has even been decided. The Property class also knows about which task it’s linked to, so using inputs and outputs in this way enables Gradle to automatically add the required task dependency.

To understand how this works, here are some input types and their equivalent property-based type.

It’s normally preferable to use the property-based type, due to the flexibility mentioned above. You’ll see these types used frequently if you read Gradle task code.

Learn more about these different types in the documentation linked at the end of the article.

A good practice is to create a task class for your custom task. The class encapsulates the task action logic, but should also declare any inputs and outputs the task expects. To do this, we use annotations.

Here’s a simple example of a task class that takes as input two quote files. The output is another file containing the result of joining the values from the input files.

Let’s define an instance of the class with tasks.register('joinQuote', JoinQuote).

Now we’ll see that the joinQuote task is no longer up-to-date and Gradle executes it again.

Finally, if we execute the clean task before joinQuote, or in other words change the outputs, Gradle also knows to execute the task again.

To try it out for yourself see the example in this GitHub repository.

Working with other input and output types

So you’ve seen how to use the @InputFile and @OutputFile annotations, create property values, and set defaults, but what about the other input and output types?

Well, here’s a task which uses all the types, for your reference.

As with all the examples in this article, you can find the code in this GitHub repository.

When we can, it’s preferable to declare task inputs and outputs in a task class using annotations. That might not always be possible or desirable, for example if we’re working with a 3rd party task class or we just want to define everything inline without creating a class. In this case, we can dynamically assign a task’s inputs and outputs within the build.gradle itself.

To illustrate this, here’s a task definition for emphasiseQuote which takes as inputs a quote file and emphasis character, and outputs a file containing the quote with the emphasis character appended on the end.

Some notes on this implementation:

Feel free to try the full example for yourself.

There are many possible use cases involving inputs and outputs, so check out this list of Gradle example projects to see if one covers your scenario.

If you think there’s something missing, please leave a comment below and I’ll try to fill in the gap!

You should now have an understanding of what inputs and outputs are, why they’re important, and how you can start using them in tasks in your own project. There’s plenty more to learn on this topic, so I recommend the following Gradle documentation.