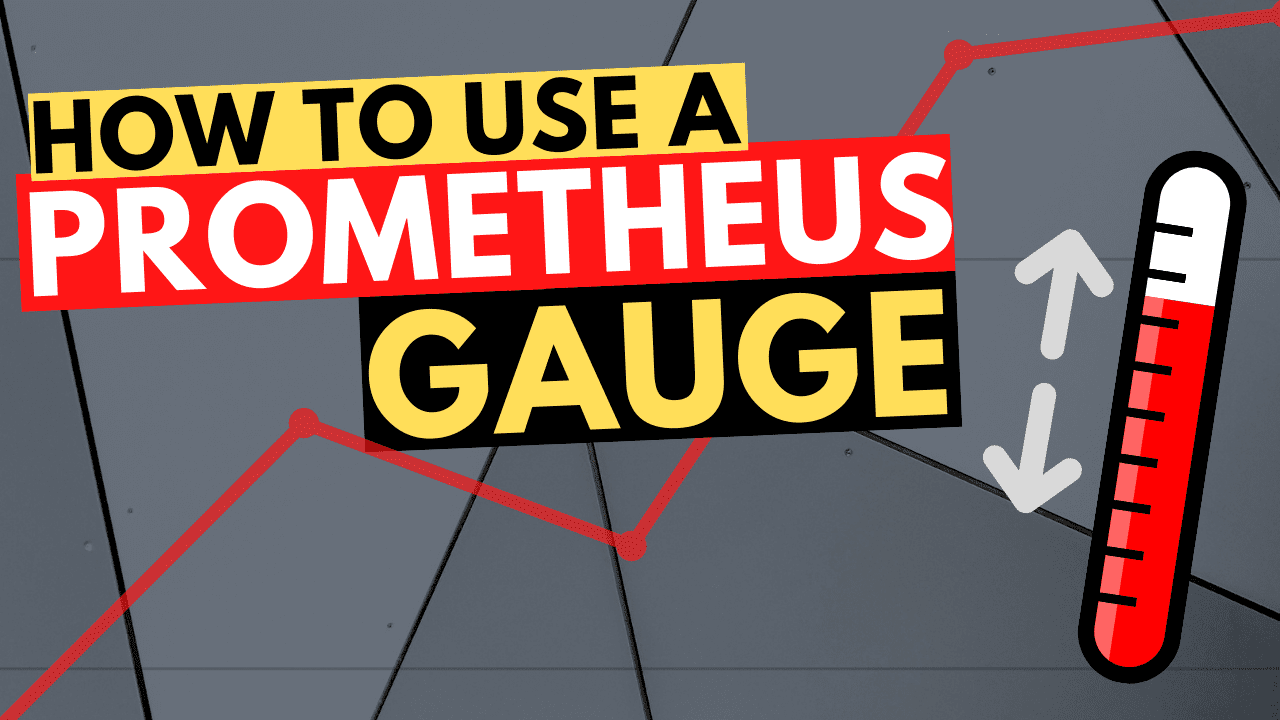 A Prometheus gauge is a specific type of metric used for measurements. That means your service always returns to Prometheus the current value of whatever it is you’re measuring.

Prometheus is regularly scraping your service for metrics though, and when your gauge’s current value is returned Prometheus stores this against the current time. You’ll then be able to run queries against Prometheus to see what’s happening to your gauge over time.

A gauge in Prometheus is represented by a 64-bit floating point number. That means it can store very large or small decimal numbers, either positive or negative.

When to use a gauge?

Any time you want to measure something which can go up or down, you should use a gauge.

Here are some examples:

If you need to measure something that only ever goes up, such as request count, then use a counter instead (see this article for more info).

Client libraries to publish gauges from your service exist for Java, Go, Python, and Ruby. They allow you to register gauges and interact with them in these ways:

The Java client library for creating Prometheus gauges is io.prometheus:simpleclient and can be downloaded from Maven central.

Here’s an example of using it to measure the size of a queue.

For a full example of gauges in a working Java application using Spring Boot, check out the tkgregory/metric-types GitHub repository.

How are gauges exposed to Prometheus?

By default Prometheus scrapes any configured targets once every minute. If your service publishes a gauge then Prometheus expects it to be in this format.

Prometheus stores observed gauge values over time, allowing you to run all sorts of queries against them using the PromQL query language.

To get the current value of a gauge metric, execute this simple query which will return all label combinations.

To get the current value of a gauge metric for a specific label, use this query.

The avg_over_time function calculates the average value of the gauge over the provided time range.

The max_over_time function calculates the gauge’s maximum value over the time range.

Functions not relevant to gauges

Most Prometheus functions do work with gauges, but there are some important exceptions such as increase and rate. This is because these functions make calculations based on the assumption that the value only ever goes up. You should never use these functions with a gauge.

Some Prometheus functions have been specifically designed with gauges in mind.

The predict_linear function tries to predict the value of your gauge at some point in the future.

This example shows us the prediction of the queue size 1 minute from now, based on the last 10 minutes of data.

An example use case for predict_linear

Imagine a scenario where you have a queue with a hard size limit of 100. If something tries to add the 101st item to the queue, things go badly wrong! You can use Prometheus alerts to be notified if there’s a problem.

One approach would be to create an alert which triggers when the queue size goes above some pre-defined limit, say 80. Even if the queue size has been slowly increasing by 1 every week, if it gets to 80 in the middle of the night you get woken up with an alert. 😢

A smarter approach might be to set things up so that you only get an alert if the queue size is predicted to reach it’s maximum size in the next 48 hours. predict_linear allows you to create such an alert, waking you up in the night only if there is genuinely an imminent problem.

Be careful though, as your gauge must behave in predictable ways for this to be a valid use case.

For a full list of Prometheus functions see the official documentation.

To learn more about the other types of Prometheus metrics, check out the article The 4 Types Of Prometheus Metrics.

How and when to use a Prometheus gauge

6 thoughts on “How and when to use a Prometheus gauge”