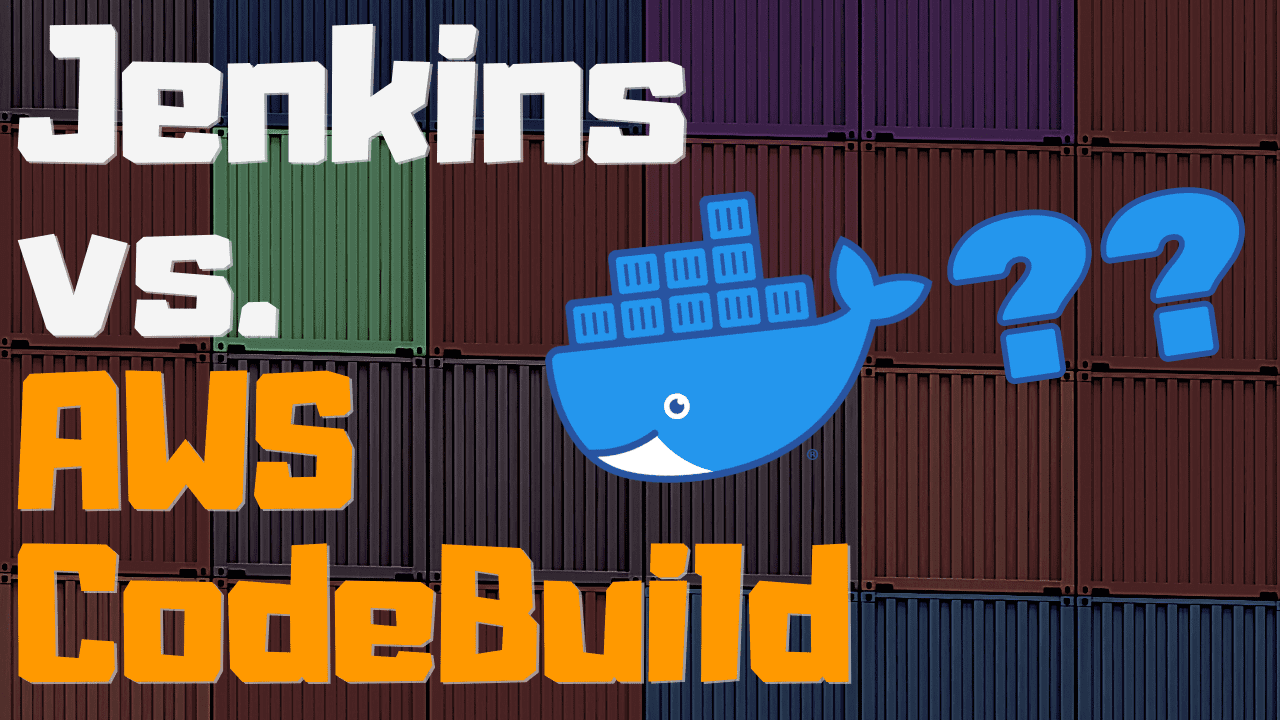 If you’re deploying your application as a container in AWS, then your continuous integration (CI) process will need to build a Docker image. Jenkins, a popular build tool used by many companies, can be extended to build Docker images. Before doing that though, why not consider AWS CodeBuild? It is after all the CI tool provided by the company who’ll be hosting your application.

In this article we’ll looks at the pros and cons of Jenkins vs. AWS CodeBuild, specifically related to building applications which run in Docker. This will help you figure out what’s the right tool for your project.

If you’re short of time, jump straight to the Jenkins vs. AWS CodeBuild side-by-side comparison.

The challenges in building Docker images in a continuous integration pipeline

These days we usually run our CI builds in their own container. This has the benefit that we can:

Normally we run these so-called build agents in Docker. But what happens when our build running in a Docker container needs itself to build a Docker image?

When a Docker container needs to access Docker we have a Docker-in-Docker scenario on our hands. The only way to resolve this is to provide access to the Docker process on the underlying host that the container is running on.

This process is called the Docker daemon, and one way to provide access to it is to mount a volume inside your container for the Docker socket, a communication channel that Docker commands can be sent through. This can be achieved by passing the volume flag when running your container:

Well that’s the theory anyway. So let’s jump in now and see how easy it is to run CI jobs to build Docker images in Jenkins and AWS CodeBuild.

The Jenkins CI service was created in 2004, and has many features and plugins available. You run what’s known as the Jenkins master, and access it through a UI. Through various plugins it can be configured to run jobs on Jenkins agents, running in clouds such as AWS.

There currently exist Jenkins plugins to run agents in both AWS ECS and EKS, but for simplicity we’ll look at ECS in this article.

Assuming you already have a Jenkins instance running in AWS, then you’ll need to follow these steps to run your Docker build on Jenkins agents in AWS ECS.

In summary this is a complex process which will take some time to get right, probably through trial-and-error. It took me several hours, even though I had done the setup once before.

The infrastructure setup can all be codified using CloudFormation, and the Jenkins setup bootstrapped using the Jenkins Configuration as Code plugin. If you’re interested in that plugin, check out this article I wrote about running Jenkins agents in Fargate.

If it’s helpful, here’s how my agent template configuration looked in Jenkins.

Once this setup is done, you can define a Jenkins build pipeline to create Docker images. It’s defined in a file called Jenkinsfile, added into the root of the application repository.

AWS CodeBuild is a service to build and test your code in AWS, and was introduced in 2016.

CodeBuild infrastructure is managed by AWS, meaning you don’t need to provision any underlying servers on which to run your builds. Because of this, your builds are automatically scalable and you can run as many or as few builds as you need.

The pricing is pay-as-you-go, so you only pay for the service when builds are running.

To setup a build for building Docker images in AWS CodeBuild, follow these steps:

The build itself is defined in a buildspec, containing the commands that should be run. This configuration can exist in the build project configuration, or as a file buildspec.yml in your application repository.

Once you’ve followed this setup your build project will show like this in the AWS Console.

The overall experience was very straightforward through the AWS Console, and it took me 5 minutes to get to a point where I had a build actually running. CloudFormation & CDK also provide support for this service.

So how do these services compare in terms of build time, specifically when building projects that need to create a Docker image?

I setup builds to compile a simple Java application, run several tests, then build a Docker image containing the application.

I configured a Jenkins agent with 2 CPU and 3 GB memory to run this pipeline.

And in AWS CodeBuild I configured an environment with 2 CPU and 3GB memory to run this buildspec:

I ran the build 10 times in each service, and took the average of the durations as reported by the service itself.

So for this specific build, AWS CodeBuild was 75% slower than Jenkins.

One contributing factor to this is that when Jenkins agents build the Docker image they benefit from image caching. This is because each build is running on the same EC2 instance (my ECS cluster only had 1), connects to the same Docker daemon, and has access to previously downloaded and built images. Conversely, AWS CodeBuild has to download the base image and build the image from scratch every time.

This is confirmed in the AWS CodeBuild build output.

Whereas in the Jenkins output there is no pull happening after the 1st build.

Bear in mind that this performance difference is likely more apparent with shorter builds, and may be insignificant with builds that have long compilation and test stages.

To help you decide which tool is right for your situation, also take the following into account.

That means you pay per minute of build time, depending on which instance type is used for your build. For the comparison done above, I used the general1.small instance type (2 vCPU & 3 GB memory) costing $0.005/minute.

To put this into perspective, if I had a build running constantly for a day, I’d be paying $7.20. See AWS CodeBuild pricing for full details in your region.

With Jenkins you need to pay for the underlying hardware, including:

Which option works out cheaper for you depends on your setup and usage patterns, so get the calculator out and see if there’s a significant difference.

Jenkins is by far the more complex of the 2 options to setup and maintain. AWS CodeBuild provisions all the infrastructure for you, so there are no servers to look after.

In terms of bootstrapping your pipelines, AWS CodeBuild wins here too since you can define your build project and buildspec in CloudFormation. There’s a significant one-off investment in configuring your ECS cloud with Jenkins, as well as provisioning your pipelines. Jenkins has made improvements in this area recently, especially with the Jenkins Configuration as Code plugin, but it still has some way to go.

Jenkins has been around for a long time, and has a rich plugin ecosystem. These plugins mean that you can configure the UI and build process in many useful ways e.g. to show a graph of performance test results over time, or to integrate with static analysis tools like SonarQube.

I haven’t used AWS CodeBuild enough yet to know about all it’s features, but make sure it can do everything you need if you’re considering making the switch. It also integrates nicely with 2 other AWS services which perhaps we’ll explore in a future article:

The Jenkins setup takes a lot longer, since you’re the one managing the underlying infrastructure. Ultimately this gives you more control, but you pay for that in setup and maintenance time which could be used for more productive activities. If you’re already bedded in with Jenkins but want to leverage CodeBuild, check out the article Integrating AWS CodeBuild into Jenkins pipelines.

As someone that’s spent a lot of time over the last few years setting up Jenkins infrastructure and pipelines, I’m excited at the simplicity of AWS CodeBuild. I’ll be considering if for new projects and look forward to exploring its more advanced features.