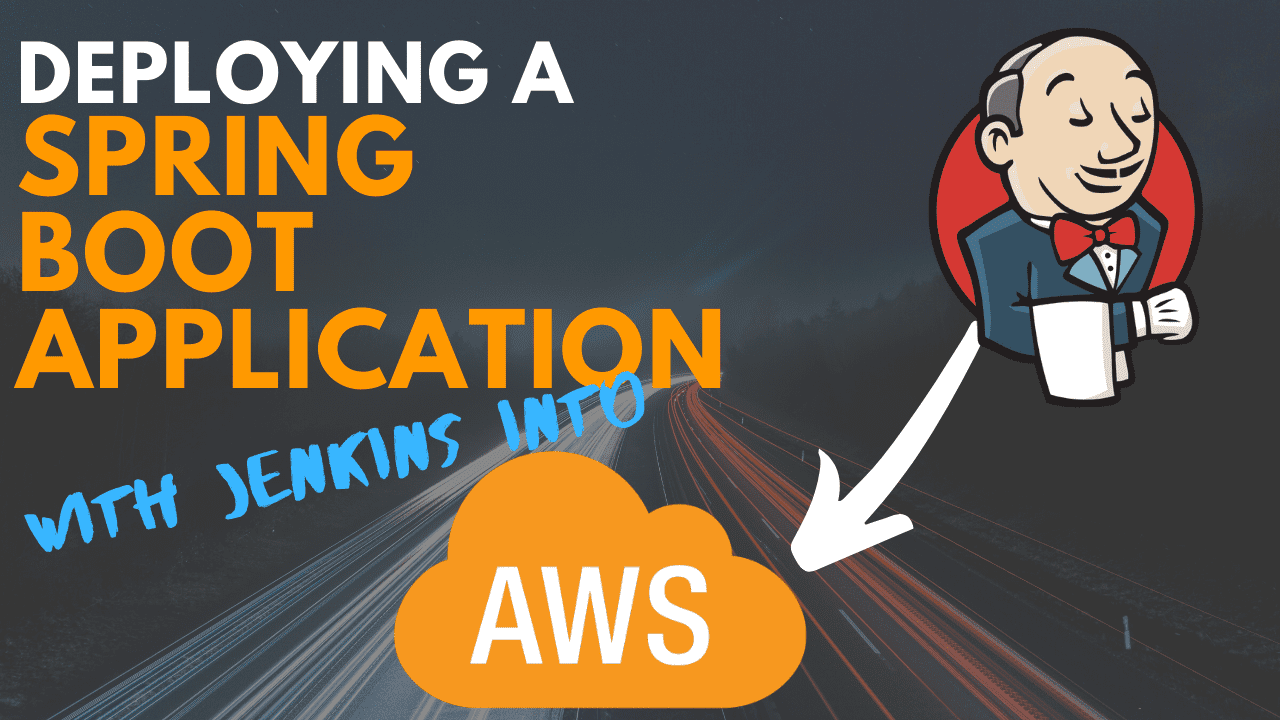 Welcome to the third and final part of this three part series where we take a Spring Boot application from inception to deployment, using Docker and all the current best practices for continuous integration with Jenkins.

In this final article, we’ll take the Docker image we pushed to Docker Hub in Part 2 and deploy it into AWS Elastic Container Service (ECS). AWS ECS represents the simplest way to orchestrate Docker containers in AWS, and it integrates with other services such as the Application Load Balancer and CloudFormation. Of course we’ll be automating everything, and deploying our microservice from Jenkins.

If you haven’t yet read Part 1 or Part 2, then check them out. We’ll be building on top of the concepts introduced there. If you’re all up to date, then let’s get right into it!

In part 1 we built a Spring Boot API application and got it building in a bootstrapped version of Jenkins. In part 2, we took this a step further by Dockerising our application, then pushing it to Docker Hub.

We ended up with a nifty Jenkins pipeline that looked like this:

Our Docker image was pushed to Docker Hub, the central Docker registry, during the final Push Docker image stage of the pipeline.

The last piece to this puzzle is to pull the image back onto a server or cloud service, or in other words deploy the image. To achieve this our weapon of choice will be the popular cloud service AWS. ☁️

To create resources in AWS, we’ll be using the AWS templating language CloudFormation. CloudFormation uses simple YAML templates that describe the end state of your desired infrastructure. This will all be orchestrated from Jenkins, as shown below:

Jenkins will deploy a CloudFormation template into AWS. AWS will then go ahead and provision all the resources that we’ll describe in our template, including:

The end result will be that we, the user, will be able to make API calls to our Spring Boot API application running as a Docker container in AWS, via its public IP address.

If you want to follow along with this working example, then clone the Spring Boot API application from GitHub.

Once you have an account, you can use the default VPC and subnets that AWS creates for you in the rest of this example. Just go to Services > VPC, and select Subnets from the left-hand menu:

You can pick any of these subnets to deploy into. Make note of the Subnet ID and also your region (top right), as you’ll need this information later.

You’ll also need an AWS access key and secret key. You can generate this by clicking on your name in the top bar, then clicking on My Security Credentials > Access keys. Then select Create New Access Key:

Make sure to securely save the Access Key ID and Secret Access Key as you won’t be able to get these details again later on.

For the most interactive experience download the AWS Command Line Interface (CLI). This is only required if you want to run CloudFormation from your machine, not Jenkins.

With the AWS CLI installed you can run aws configure to setup your credentials:

Then they get stored in the ~/.aws/credentials file under the default profile:

You should now be able to run AWS CLI command against your account such as aws s3 ls.

You’ll need a Docker Hub account as the Jenkins pipeline pushes a Docker image. Later on it also pulls it when deploying to AWS. Check out this section of the part 2 article for full instructions.

3. Creating a CloudFormation template for the application

We’ll add our CloudFormation template in a file named ecs.yml in the root of the project:

Fargate
The Fargate launch type means that AWS will handle provisioning any underlying resources (i.e. VMs) required to run our container, so there’s less for us to manage

4. Building a CloudFormation environment from Gradle

Doing as much as possible from our build automation tool, in this case Gradle, makes sense. We’ll setup Gradle to deploy our CloudFormation to AWS by simply running a task. Fortunately a plugin exists to do the hard work, called jp.classmethod.aws.cloudformation.

Apply the plugin in the plugins section of build.gradle:

We’re going to define a variable for imageName, and allow passing in a custom Docker Hub username:

We’ll now configure the Gradle CloudFormation plugin to call AWS in the right way. Add the following configuration at the bottom of build.gradle:

Lastly, we add the following which configures the plugin to run against a specific AWS region, by passing in the Gradle property region.

Testing out the CloudFormation stack creation

If you setup the AWS CLI with your credentials in the AWS prerequisites section, then you can run the following command to test out your changes (if not we’ll be running it in Jenkins in the next section):

This will initiate the creation of a CloudFormation stack (awsCfnMigrateStack) then wait for it to complete successfully (awsCfnWaitStackComplete). It may take a few minutes.

You’ll be able to see the stack in the AWS Console too, by going to Services > CloudFormation > Stacks:

Delete the stack for now as we’ll be creating it in Jenkins in the next section. Run ./gradlew awsCfnDeleteStack awsCfnWaitStackComplete.

5. Deploying to AWS from Jenkins

Now that we can build our CloudFormation stack from Gradle, let’s get it working in an automated way by integrating it into our Jenkins continuous integration pipeline.

You’ll remember from the part 2 article that we had a project setup to get Jenkins running in a Docker container, with all the jobs being created automatically from a seed-job. These jobs would reference pipeline definitions in Jenkinsfile files in our Spring Boot API application project.

Fast pass
To get up and running straight away just grab the jenkins-demo project from GitHub. You can make the below changes yourself, by starting off from the part 2 theme-park-job-docker branch.

Alternatively, jump right in by checking out the theme-park-job-aws branch which has everything setup ready to go (fast forward to the Starting Jenkins section, if you like).

To allow integration with AWS we’ll add two plugins to our Jenkins Docker image. Remember that these are defined in plugins.txt, and get added when we build the Docker image.

Let’s add these additional entries to the end of plugins.txt:

A new job to deploy to AWS

The createJobs.groovy file uses the Jenkins Jobs DSL plugin to create various jobs that reference a Jenkinsfile in a specific repository. We’re going to add a new job to this file to reference a new Jenkinsfile which we’ll create shortly in the Spring Boot API application repository.

Add the following section to createJobs.groovy:

If you want to point this Jenkins instance at your own repo, don’t forget to change the remote url property above. Also, don’t forget to update seedJob.xml to point at the correct url and branch name (e.g. theme-park-job-aws) for grabbing the createJobs.groovy file.

Back in the Spring Boot API application project, let’s add the Jenkisfile-aws file to define our new pipeline:

Start up Jenkins from the jenkins-demo project now by running ./gradlew docker dockerRun. This may take some time, but will build the new Docker image and then run the image as a Docker container:

Browse to http://localhost:8080 and you should have an instance of Jenkins running with a default seed-job.

Since our pipeline also includes a stage to deploy to Docker Hub, you’ll also need to add a Username with password type credential with your Docker Hub login details. See part 2 for full details on settings this up.

There are 2 properties that we need to configure as Global properties. These are environment variables that are made available in any job or pipeline. Go to Manage Jenkins > Configure System.

Don’t forget to hit the Save button when you’ve configured these.

Now it’s showtime! 🎦 On the Jenkins home page run the seed-job, which will bootstrap all the other jobs via the createJobs.groovy script:

Importantly, we now have a theme-park-job-aws job. This references the Jenkinsfile-aws in the Spring Boot API project.

Our pipeline has built, including running the Deploy to AWS stage! Awesome, but maybe we need to check it’s really deployed?

Over in the AWS Console, navigate to Services > CloudFormation > Stacks and you’ll see our spring-boot-api-example stack:

It’s reporting one service with one running task. Good news, as that means we’ve got ourselves a Docker container running. ✅

Click on the cluster name, then the Tasks tab. There should be a single task listed, so click on the task id:

On the page that follows there’s lots of information about our task, but importantly for us under the network section we have a public IP:

You’ve probably guessed what comes next then? If you remember part 1 of this series, we were using Postman to make requests to our service. Let’s fire up Postman again and make a GET request to our service running in AWS, substituting in the public IP in the format http://<public-ip>:8080/ride:

Of course if you prefer, you can just use a browser.

Success! That was quite a ride, but we got there in the end.

You’ve now seen how to add an AWS deployment to a Jenkins pipeline, using a CloudFormation template that lives in the application repository. This is a very powerful concept, and can be rolled out to infrastructures that contain many microservices.

For the purposes of keeping this article concise, we’ve deployed a simplified setup. For production purposes, you’ll want to also consider:

Don’t forget to delete your AWS resources, which you can do by going to Services > CloudFormation, then select the stack and click Delete.